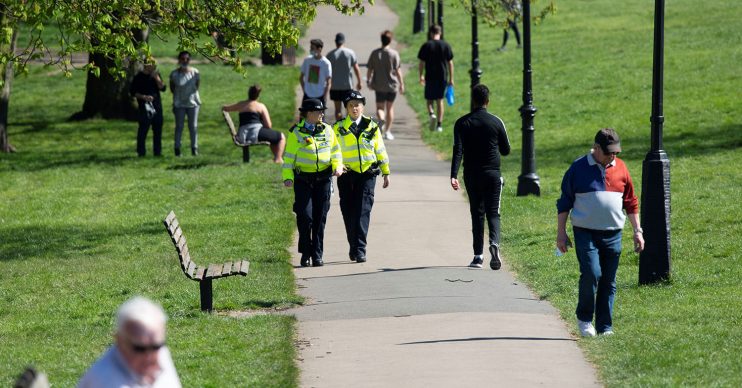 Brits are continuing to meet up in public places

There have been calls for beaches and parks to close as Brits continue to ignore lockdown advice.

He also warned that ALL exercise could be banned if people carry on flouting the rules to stay at home.

Mr Hancock told the BBC’s Andrew Marr Show today (April 5): “If you don’t want us to take the step to ban exercise of all forms outside the home, you have got to follow the rules.

“Let’s not have a minority spoiling it for everybody.”

He added to Sky News: “To the very small minority who are continuing to flout the guidance – you are putting others lives at risk and you are putting yourself in harms way.”

#Coronavirus: "If you don’t want us to have to take the step to ban exercise of all forms outside of your own home then you’ve got to follow the rules," says Health Secretary Matt Hancock#Marr https://t.co/nyk2HWcZ39 pic.twitter.com/z7SbHjSvm6

Mr Hancock admitted he finds it “quite unbelievable” that people are still ignoring the advice.

He insisted: “We are crystal clear in the guidance what people should or shouldn’t do.

“This is not a request, it’s a requirement. People need to follow it.”

However, people have taken to Twitter to demand parks are shut.

One person said: “Close the parks. Enough is enough.”

Close the parks. Enough is enough

Another wrote: “Close all major parks. Police monitor all places people likely to go for a chill like beaches.

In addition, a third added: “They don’t need to stop people exercising. Just close all of the parks. People can jog near their homes and walk the streets responsibly.”

Police monitor all places people likely to go for a chill like beaches.

They don’t need to stop people exercising. Just close all of the parks. People can jog near their homes and walk the streets responsibly.

On Sunday, April 5, it was confirmed the UK coronavirus death toll has risen by 621 taking the total number of people who have died to 4,934.

The Department of Health confirmed a total of 195,524 people have been tested for the deadly bug, however, 47,806 tested positive.

On Saturday, it was confirmed 708 people had died after contracting COVID-19.

Among those 708 people, a five-year-old child with underlying health problems sadly died.