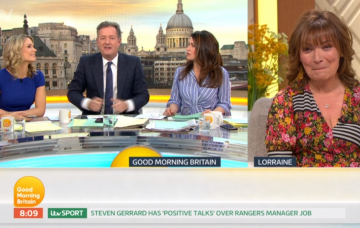 She was left slightly flustered

Piers Morgan had a bone to pick with Lorraine Kelly on Wednesday’s Good Morning Britain.

When the show linked to the Lorraine studio to find out what was coming up, Piers took his chance to pull Lorraine up on comments she apparently made about him last month.

Piers revealed that his wife, Celia, told him she had heard Lorraine off-camera accusing Piers of “having so much work done” on his face, despite telling him on air he looked great.

Piers had appeared on Lorraine’s show last month to talk about his beauty secrets, with wife Celia phoning in on air to embarrass him!

But apparently while on the phone, Celia overheard something interesting!

It came to light after Lorraine told Piers and Susanna her show on Wednesday would cover how eyebrow tattoos can be the secret to an age-defying look.

“I’m having one with Lorraine,” Piers said, referring to the procedure.

“Have you not already had your eyebrows done?” Lorraine asked. “You’ve had everything done!”

“You’re not supposed to reveal that, Lorraine,” Susanna Reid piped up.

Piers hit back: “When I appeared on Lorraine’s show to discuss my beauty secrets, on air Lorraine was like, ‘oh, you look fabulous and beautiful.’

“But what I was later told by my wife – who could hear Lorraine talking to Dan Wootton just before I went on air – was ‘oh he’s had so much work done’ and Wootton went ‘oh I know he has!'”

As Piers continued his rant, Lorraine was left slightly flustered and burst into laughter.

“The pair of them apparently… Then suddenly on air, ‘oh tell me the secrets of your natural beauty’. So you were caught, Kelly!” he added.

“You were caught telling the truth,” Susanna quipped.

But Piers 53, insisted he has never had any cosmetic procedures done to his face.

“Let me once again remind you, this is natural beauty,” Piers said, pointing to his face.

“So you haven’t had plastic surgery?” Susanna asked her co-presenter. “Have you had injections or facials?”

“No!” Piers said. “I don’t even use moisturiser. God gave me this. I’m sorry if it offends anybody but this is what happens when God showers beautiful blessings on you. You get this.”