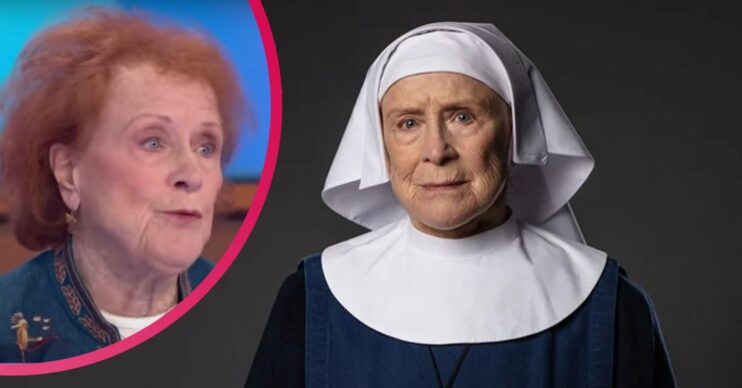 Call the Midwife star Judy Parfitt, 86, is beloved by viewers for her portrayal of Sister Monica Joan.

But away from her role in the BBC drama, Judy is well known for her BAFTA-nominated performances in The Jewel in the Crown and Girl with a Pearl Earring.

She’s also enjoyed success in the US with appearances in ER and Murder, She Wrote.

But in one of her most recurring US TV roles, as Queen Lillian White in The Charmings, Judy had an opportunity to star alongside her actor husband Tony Steedman, who played Santa Claus in a Christmas special of the fantasy series.

Sadly, however, Tony – who also starred as Socrates in Bill & Ted’s Excellent Adventure – would later succumb to dementia.

Judy has previously opened up about losing her husband to dementia on Loose Women.

She also revealed how the condition ‘stole’ Tony away from her in a 2014 Daily Mail article.

Judy said at the time it was not easy for her to single out the moment she ‘lost’ Tony, when considering how she increasingly had to look after him.

The actress detailed how she had to start tying his shoelaces for him and how they stopped laughing together as pivotal points.

Judy also recalled how Tony could switch between “lucidity and derangement” until his passing in 2001.

However, Judy does believe she recalls an early instance of Tony’s condition. And it came during his festive appearance on The Charmings as he struggled to remember his lines.

She said: “No matter how hard he tried, they wouldn’t stick. At the time, I didn’t think much of it. He was in his early 60s and I thought an existing trait was perhaps getting worse through age. Now I realise that was probably the start of it.”

Judy continued: “Alzheimer’s is such a terrible disease, the body of the person you love is there but they’ve gone — your husband is gone — and they become your child and you have to look after them as you would a child.”

‘Alone in a marriage’

Judy also noted how she felt very alone as Tony slipped away. And even though she was grateful for support from her family, she concluded it is no substitute for intimacy with a spouse.

Judy also heartbreakingly urged readers to consider how the partners of dementia sufferers are helpless to prevent them from disappearing.

She reflected: “If you’re with somebody who has a serious illness you can usually talk to them, have a laugh every now and then — the person is still with you. With dementia there’s no conversation, there’s no togetherness, no sharing.”

Call the Midwife airs on BBC One on Sunday February 6 at 8pm.