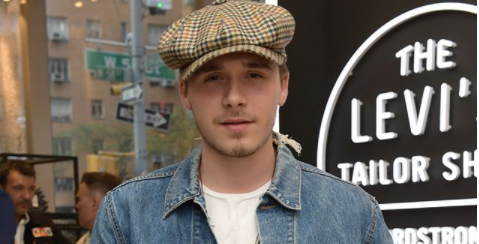 Father and son had an emotional reunion.

David Beckham got the best birthday surprise when his eldest son Brooklyn made an unexpected appearance at his celebratory dinner.

His wife Victoria shared a video with her Instagram followers of the moment Brooklyn, 19, walked into the restaurant and crept up on his father, who had his back to the door.

So the former footballer was overcome with emotion when his son surprised him as he was eating, wrapping his arms around his shoulders to give him a big hug.

“Are you OK?” David can be heard asking as he embraces Brooklyn with tears in his eyes.

“I didn’t know Brooklyn was coming!” his six-year-old sister Harper can then be heard exclaiming.

His younger brothers Romeo, 15, and Cruz, 13, also looked delighted by his appearance.

Victoria shared two versions of the moment, one she filmed herself from inside the restaurant, and the other shot by a friend showing Brooklyn approaching from the outside to surprise his family.

Victoria captioned her video of the moment: “The biggest surprise of the day…. Welcome home @brooklynbeckham X happy birthday @davidbeckham I love u so much x kisses.”

On the version on her Stories, she wrote: “Look who came home to surprise his dad for his birthday!”

Their fans went wild for the cute video, with many saying it had reduced them to tears.

“This is so precious,” said one.

“That’s the most beautiful thing I’ve seen for a very long time,” said another.

“That is the biggest most beautiful hug EVER. So beautiful,” said a third of David and Brooklyn’s embrace.

“This actually made we shed a tear!!!” admitted a fourth, while a fifth said: “Can’t stop watching this! This is why I’ve always been obsessed with the Beckham’s #familyfirst.”

Earlier in the day, Victoria had wished her husband a happy birthday with a cute picture of him with their three youngest children, saying how much they missed Brooklyn.

Brooklyn also posted his own tribute writing, “Happy birthday dad xx I love you to the moon and back,” alongside an old snap of them out for a drink together.

He kept quiet that he would be able to wish his dad a happy birthday in person that evening to give him the perfect end to his big day.