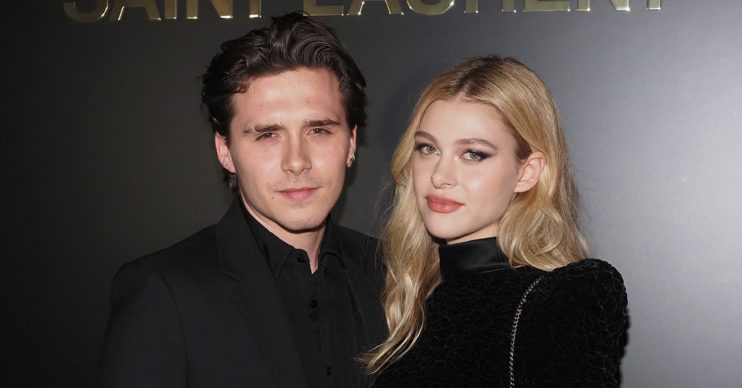 The couple recently announced their engagement

The 21-year-old photographer took to Instagram to share a string of photos of the couple on a recent trip.

But it was Brooklyn’s choice of caption that really got fans talking, after referencing lyrics from the Spice Girls single 2 Become 1.

The college of snaps showed the pair in a series of poses, including one of Nicola in a towel and Brooklyn swimming in the sea.

Fans rushed to speculate over whether the post was actually a baby announcement.

A second agreed: “This better be a baby announcement.”

A third wrote: “Congratulations…. Baby spice is on it’s way 😍 .”

Another guessed: “Bet they’re gonna have a baby.”

Entertainment Daily has contacted Brooklyn and Nicola’s reps for comment.

The happy couple – who started dating in November 2019 – announced their engagement with a series of posts on social media in July.

David and Victoria’s eldest son revealed: “Two weeks ago I asked my soulmate to marry me and she said yes.

“I am the luckiest man in the world and promise to be the best husband and daddy one day. I love you baby.”

Following the announcement, reports claimed Brooklyn and Nicole may choose to get married in St Paul’s Cathedral.

The pair can use the iconic London venue for their wedding as Brooklyn’s parents both have OBEs.

Meanwhile, it’s also believed Gordon Ramsay may be in charge of food on the couple’s big day.

The celebrity chef goes back a long way with David and Victoria – and their families have grown close, too.

A source told The Sun: “David and Victoria want Gordon to oversee the food for Brooklyn’s wedding day.”