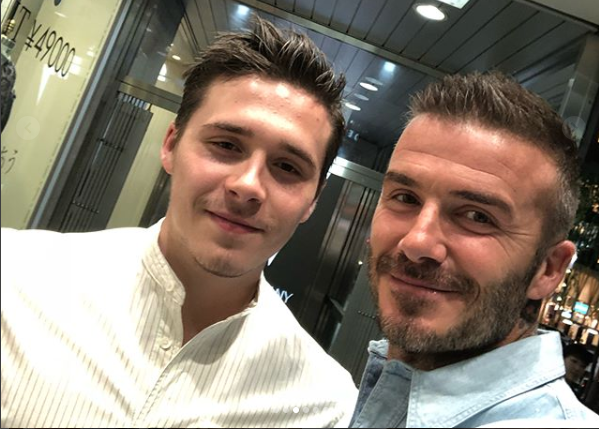 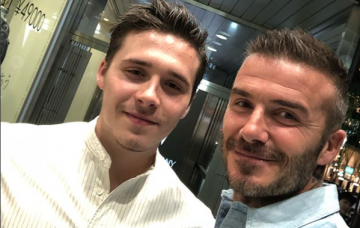 The 19-year-old revealed in July that he had three cherubs tattooed on his chest which are in the same position as his famous dad’s Jesus and three cherubs ink.

Now Brooklyn has made the tattoo even bigger by adding shaded clouds around the cherubs.

The aspiring photographer shared a shirtless snap to Instagram on Tuesday to show off the tattoo.

He tagged his tattoo artist, Doctor Woo, and captioned the pic: “Bloody love it mate.”

One person said: “Dude you have such great artistically tattoos. Keep up the good ink,” while another wrote: “Incredible!”

In the photo, some of Brooklyn’s other tattoos are on show including a cherub holding a bow and arrow, which is placed in the centre of his stomach.

He also has the words “mama’s boy” inked on the top of his chest, which is a tribute to his mum Victoria.

Brooklyn began his tattoo collection back in April last year, when he got a portrait of a Native American on his forearm.

Earlier this year, Brooklyn unveiled another tattoo which paid tribute to his mum.

The tattoo features a trio of roses over a heart, with the word “Mum” emblazoned across the middle.

He also has a tattoo on his hand which simply says 1975 – commemorating the year of his dad’s birth.

The star also has the word ‘buster’ tattooed just above his belly button, which has a special meaning to David.

And it’s not just his parents that Brooklyn has decided to pay tribute to through his ink collection.

In March, Brooklyn had a ballet dancer in pointe shoes, with flowing locks and a crinoline dress, tattooed on his lower leg in tribute to his seven-year-old sister Harper – who takes ballet classes.

He shared a photo of himself cuddling his new pet and introducing her to his fans.

Victoria also posted her own shot of the new pup to Instagram stories, showing Fig and the family’s other dog Olive together.

She captioned the image “@brooklynbeckham has a new lady in his life.”

What do you think of Brooklyn’s latest tattoo? Leave us a comment on our Facebook page @EntertainmentDailyFix and let us know what you think!