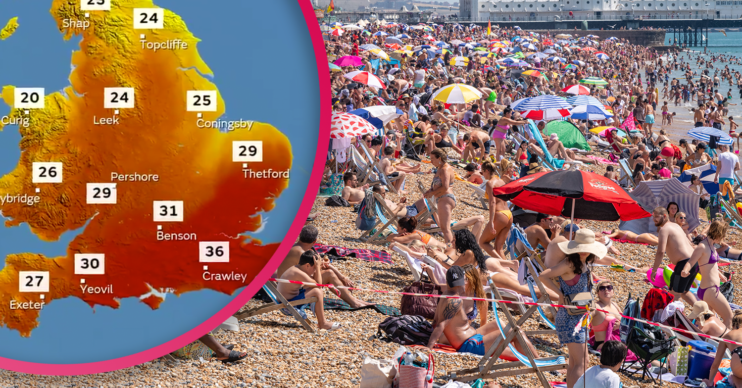 Comes after scenes of 'bedlam' at British beaches yesterday

Brits have been warned to stay away from beaches as temperatures are predicted to reach 36˚C today (August 8).

Local councils were forced to issue stay away warnings online, while a scene of “bedlam” unfolded in Wales.

As a result, Brits have today been asked to stay away.

As early as 10.30am yesterday, the beach in swanky Sandbanks, Dorset, was listed as an area to avoid.

Why do we have to stay away from beaches?

One look at the pictures shows that it most certainly wasn’t an underestimation.

Speaking to Sky News, one woman revealed she had arrived early and set out a space for herself and her family.

However, they were forced to move after more and more people flocked to the beach, coming too close to her loved ones.

She said: “We set out enough space around us and we actually had to move a couple of times.”

The woman added: “People just kept coming and getting closer and closer to us and playing music. With small children it’s just not the distancing you’re meant to be doing.”

Broadstairs, in Kent, was at capacity by mid-afternoon.

Margate and Joss Bay were also packed to the sandy rafters.

#UV and #pollen levels will be moderate to high today ☀️🤧

Take care in the sunshine 🧴 pic.twitter.com/R9hIBfcz63

The RAC has said it is expecting this weekend to be the busiest of the year, with sunseekers flocking to the coast.

A couple of beers and a heatwave then people go crazy.

He told the Telegraph: “The car parks are full and cars are parked illegally. Social distancing is impossible at the moment, and people are queuing to get into shops.”

“Why would anyone want to go there?” asked on Brit on Twitter.

“So selfish,” slammed another.

“Shut the beaches!” another demanded.

“Thousands will die,” another tweeted sadly.

“To hell with social distancing,” another commented.

Another declared that “common sense is lacking” among those packing onto beaches.

Seek quieter parts of the seafront in order to maintain social distancing. pic.twitter.com/FVPIvlEy30

“Stay away from the beach because common sense is lacking there. A couple of beers and a heatwave then people go crazy,” they said.

Second lockdown on its way?

Another predicted a second full lockdown would soon be enforced by the government.

“A second lockdown is coming on because these beaches are not closed to all but residents,” they said.