Parts of the UK enjoyed another 30C scorcher today but thunderstorms are set to return.

Brits basked in the hottest August Bank Holiday on record at the weekend, with temperatures reaching 33.2C (91.8F) at Heathrow beating the previous record of 28.2C set two years ago.

But the warm weather isn't sticking around as a yellow thunderstorm warning is in place from midday on Tuesday (August 27) to just before midnight.

Today will be the last of the #hot days in the east 📈☀️ as unsettled weather in the west will bring fresher conditions across the country this week 📉🌧️ pic.twitter.com/HKpOyLQt7t

The Met Office placed the warning across almost the entire eastern side of the country from Scotland to London.

Parts of the North West of England and Midlands are included.

The weather service said there's a small chance that homes and businesses could be flooded quickly.

The heatwave is going to continue for some of us for another day.

There is also a small chance of fast flowing or deep floodwater causing 'danger to life'.

The unsettled weather could cause power cuts while spray and sudden flooding could lead to difficult driving conditions and some road closures. 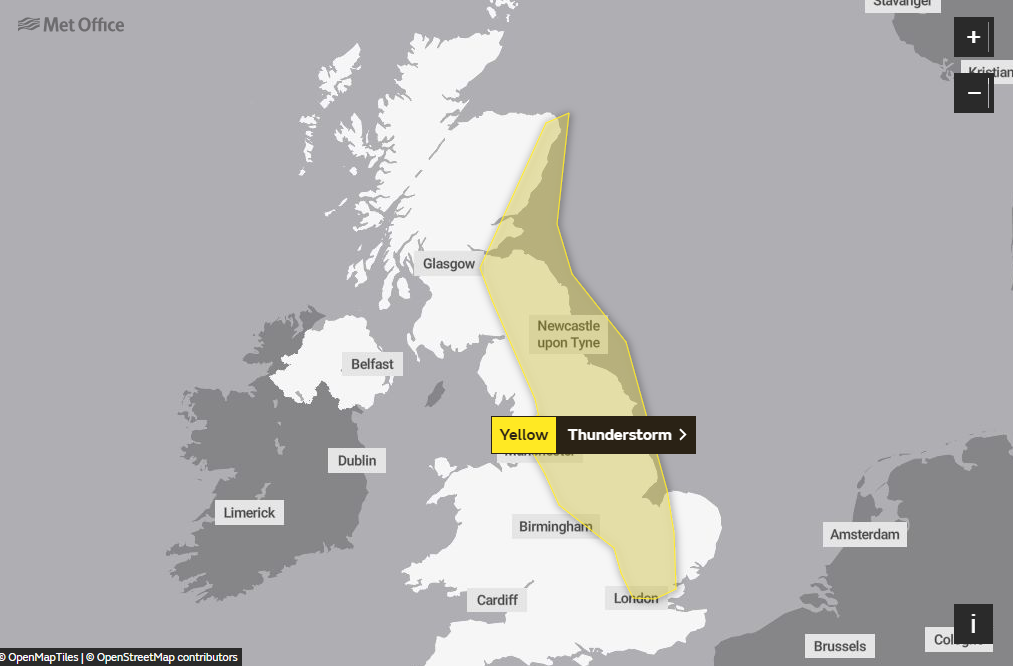 Thunderstorms will batter parts of the country (Credit: Met Office)

It comes after Brits soaked up the glorious sunshine this Bank Holiday weekend.

According to the Mirror, Met Office meteorologist Craig Snell said: "The heatwave is going to continue for some of us for another day (August 27) with temperatures reaching around 33C, but also across the UK we are also starting to see a transition with some places seeing cloud and fresher air.

"This cloud will start to move up across Devon and Cornwall and through this evening it will come across northern and central parts of the UK."

He said there's also a risk that the thunderstorms will increase as the week goes on.

Mr Snell added: "Temperatures will be staying close to the high 20s but the rain and thunderstorms will start moving eastward."

Heading out this afternoon?

You may need an umbrella in the west ☔️ and sunglasses elsewhere 😎 But watch out for those #thunderstorms ⛈️ pic.twitter.com/mRWNPHS7a0

Bala in Snowdonia National Park was the warmest place in Wales, as temperatures reached 25.5C.