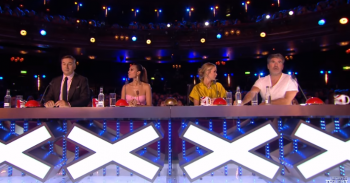 Britain’s Got Talent returned to screens last night, and it’s already confused viewers, after the performance of one mysterious contestant.

Judge Amanda Holden was left terrified after being the subject in a magic trick that revolved around a ghost haunting the theatre the show is recorded in.

The contestant – a magician named Elizabeth – put Amanda through a terrifying magic trick, before making the mysterious pronouncement that “The night’s not over yet” leading fans to believe there would be more of her performance later.

But the magician never returned to the stage – and there was no sign to indicate whether she’d progressed to the next stage.

Fans took to twitter to express their confusion and wonder about whether Elizabeth would return to the show.

What actually happened to that Elizabeth last night? She never came back nor did she actually gain any votes to go through. Did she make it or did she just vanish like Houdini?…..🤔🤭 #bgt

Im still waiting for Elizabeth to return ! 👻 and the show finished hours ago! #bgt

That Elizabeth was incredible, but what did she mean when she said “The nights not over yet”? #BritainsGotTalent #BGT

The magician started her performance by talking about the tradition of ghosts in theatres, as she slowly approached the judges’ table.

She handed Amanda a journal before leading her away from the table, and out of the auditorium.

She eventually led the judge to a table in a small room and showed her a pile of photos she claimed were over a hundred years old.

She piled them up face down and asked Amanda to select whichever one she felt drawn to, and place it in a small box.

When Elizabeth reopened the box, she revealed that the photo Amanda had chosen was of a woman called Agatha Turner, who had died in 1860.

A marked passage in the journal described the woman, and when Amanda looked over her shoulder she saw her name written on the wall.

And when she turned back to face the magician she found that Elizabeth had transformed into Agatha.

Agatha then led Amanda back to the auditorium – only to transform back into Elizabeth as they approached the audience.

And while she promised to return, the show ended without another glimpse of her, leaving everyone asking “where is Elizabeth?”

What did you think of Elizabeth’s act? Leave us a comment on our Facebook page @EntertainmentDailyFix and let us know what you think of this story.