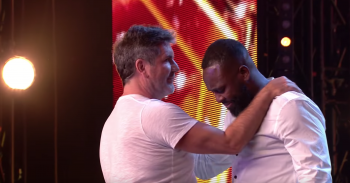 He's said to have known judge Alesha for 'many years'

The 39-year-old admitted to having known judge Alesha Dixon for years before he took to the audition stage with his act.

When Simon Cowell sent him straight through to the semi-finals with the Golden Buzzer, some fans claimed it  was a set up.

The young comedian walked out on stage to the shock of Alesha, who kicked things off, saying “Oh my goodness, hello!”

Kojo looked a little cheeky as he said “hello, Alesha,” before the judge asked him how he was.

“I was not expecting to see you today,” she went on. “I’ve known Kojo for many many years,” she said, before letting him get started with his act.

The comedian kept the crowd laughing with a string of jokes about growing up with African parents, dealing with banking and the trials of taking a Black Cab when you’re broke.

When the act was over the judges had nothing but praise for him. After a standing ovation brought the comedian to tears, Amanda Holden responded saying “the act just got better and better.”

“I’m so happy right now,” Alesha said. “I’ve always respected you. My respect level for you has just gone way up there, my friend. Now let’s see how far you can take it.”

David Walliams kept things simple, saying “When someone’s really funny there is nothing much to say other than you are brilliantly funny.”

Simon however seemed to be going the other way at first. “I’m going to be honest with you, Kojo,” he said, “I don’t really like comedians on this show.”

Then, as he stood up, he said “But I loved you,” and slammed his hand on the Golden Buzzer.

Kojo was so overcome he fell to the floor as confetti rained down around him. Simon took to the stage to confirm his decision, embracing Kojo and saying  “I have to tell you, I don’t know what it is, you are so funny and so unpredictable, you just have the most amazing energy. ”

He went on to tell him to enjoy his success.

But not everyone was on Simon’s side, with some saying the Golden Buzzer was underserved – even claiming the show was fixed.

I’ve seen #kojo live and he is a very talented amazing comedian but that set was distinctly average. It’s the first time I saw @BGT being rigged before my eyes! Totally set up imo #BGT #goldbuzzer #Kojo

That bald bloke set himself on fire upside down in a straight jacket and didn’t get the Golden Buzzer. Aleeshas mate says a few alright jokes then cries and Cowell presses it. Fix!!!!! #BGT

Was anybody watching the same show as me. Average comedian, friend of Alesha, gets golden buzzer. What a fix, in front of many viewers. DUPED

But there were some viewers firmly on the side of the judges, insisting that the act was hilarious.

I haven’t laughed in ages at a comedian on #BGT but Kojo, blimey I was crying with laughter and happy tears!

We’ll have to see if he can keep up the laughter when the semi-finals roll around.

What did you think of Kojo’s act? Let us know what you think on our Facebook page @EntertainmentDailyFix