The UK’s first man to fall pregnant has revealed he has received death threats since announcing he is going to have a baby.

Hayden Cross, who was born a girl 20 years ago, opened up in his first live interview for Lorraine.

The former Asda worker is now legally male, but ha stopped his transition so he could get pregnant and have a biological child before it’s too late.

Hayden is now four months into his pregnancy thanks to a sperm donor.

Speaking of being pregnant at a young age, he said: “It’s kind of scary, because it’s not something that I wanted to go through, but I’m happy that I am going to have a biological kid at the end of it.

“I wanted my eggs to be frozen so I could use a surrogate in a few years time when I’m ready to have kids.”

He added: “It’s too early, but it’s my only chance.

“I’ll try my best to do everything I can to support my kid, ideally I would wait until later on and have kids forever later on down the line when I was older in a settled relationship.”

Hayden also opened up about how he has been threatened over his decision to have a child.

“I have some bad and some good reactions.

“I have had death threats and people saying they going to beat me up.” 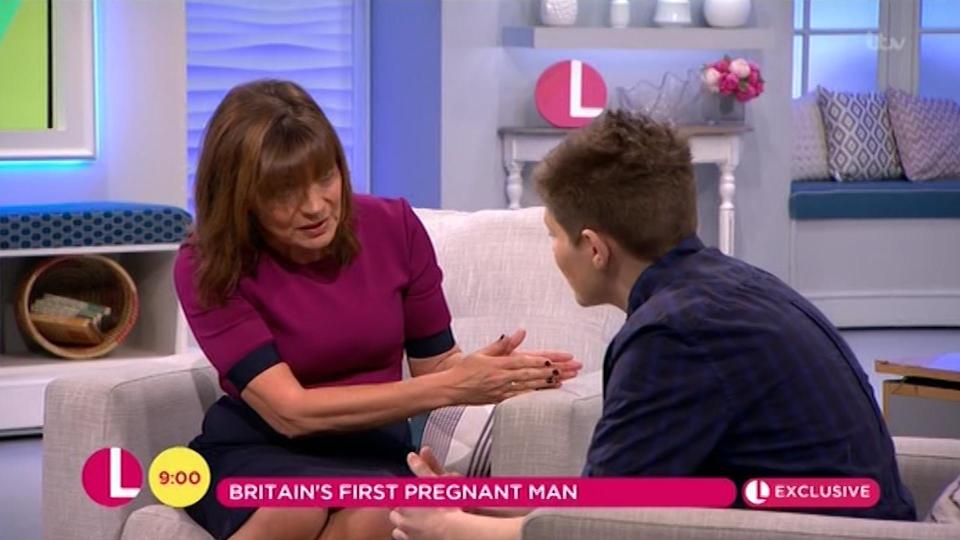 “It is hard to get your head round it. But there are people out there that need help and support. Not everybody has somebody. And that’s when things get bad.”

The 20-year-old also confessed he is dreading giving birth: “It’s not easy. It’s scary. I don’t want to give birth – but if I have a biological child at the end of it then it will have been worth it.”

Hayden will complete his transition, which will remove his breasts and ovaries, after his child is born.

Desperate to have a baby at some point in his life, he asked the NHS to freeze his eggs before he completed his transition.

But he was left devastated when docotrs refused to give him the £4,000 treatment and so turned to Facebook to find a sperm donor.

He told Lorraine he realised who he really was just three years ago after turning 17.

He said: “I didn’t realise I was trans till I was 17. When I turned 17, I met my group of friends and that’s when I realised. I came out and I’ve been a lot happier since.

“I wake up every day and I already hate myself as it is, then thinking now I’m carrying baby as well?!

“But I’ve just got to try and stay focused, stay positive and think I’m doing it for a good reason.

“I’m doing it because at the end I’ll have a baby that’s biologically mine.”

Good for you Hayden!