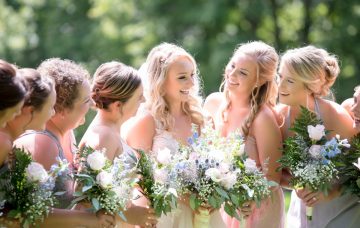 Her friend landed her £250 bill despite choosing her dress

A bridesmaid has been urged to quit her friend’s wedding role after the bride demanded £250 for the dress she chose for her.

The woman was stunned when her pal, who is getting married next summer, landed her with the bill, despite not getting a say on the style of the outfit.

She took to Mumsnet to ask if it was unreasonable to refuse to pay and was flooded with replies from people saying she should quit her role and branding her friend a “bridezilla” control freak.

The woman, who is one of five bridesmaids, posted: “I am the only one of the five who has young children, I am also a single parent with very little money.

“Already the ‘honour’ of being her bridesmaid is being very costly. There is a hen do that I cannot make as it is a long weekend away (not possible for me) and the bride was quite unfair about it saying she was upset that not all of her bridesmaids would come.

“We went to the bridesmaid dress fittings and selected our sizes from the pre-selected dresses of her choice. The dresses were £250.

“Yesterday the bride messaged saying she was going to order them so can we all transfer the cash by the end of the day.

“I don’t have that kind of money and I am just really shocked. Surely if we were paying for our own, it should be a dress of our own choice.

“I would never spend £250 on an item of clothing, especially one that I will never wear again, but what choice do I really have now?

“All the other bridesmaids have responded that they have transferred (it’s a group Facebook chat). I have no idea what to say!”

One user replied: “I’d be politely backing out of being her bridesmaid, as a real friend would be mindful of the cost and wouldn’t be making a fuss about you not going to the hen do. You’re best of out of it.”

Another wrote simply: “‘I quit’ should do it.”

Someone else added: “I cannot get my head around this thing where the bride expects her bridesmaids to pay for their dresses. It’s CFery of the highest order.”

One Mumsnetter posted: “It’s the bride’s choice to have as many bridesmaids as she wants but she should have the budget to pay for the dresses for that many.

“No way you should be paying for your dress that isn’t your choice and can only be worn once.

“A non-bridezilla would get that. If she doesn’t then step back and dodge that bullet.”

Is the bridesmaid right to complain? Should she quit? Leave us a comment on our Facebook page @EntertainmentDailyFix and let us know what you think!