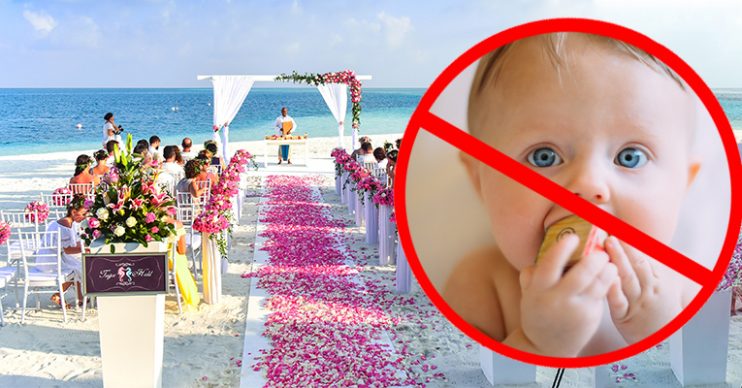 The tot will have to stay at home…

When your best friend tells you she’s getting married, there’s usually a whirlwind of bridal fittings and hen parties to look forward to.

However, for one friend of the bride, the upcoming nuptials don’t appear to involve her.

In fact, she can only attend the wedding – which is taking place overseas – if she leaves her newborn baby at home.

Taking to Mumsnet, the woman revealed she isn’t keen on doing that and might just boycott the nuptials.

She said: “My best friend is getting married this year abroad. It’s over the school holidays so the price of the flights and accommodation is absolutely sooooo expensive.”

Read more: Women can get pregnant by swimming in the same pool as men, children protection boss claims

She added: “We are a very close girl group of seven and three of us will have newborn babies by the time the wedding comes around. What’s annoying me is the bride has said no kids allowed.”

While the woman said she “totally” understood that people don’t want kids at a wedding, she doesn’t think the same should go for babies.

“It’s not like he would be running around making noise. I feel like I might not go, but when I mentioned this she seemed so annoyed,” the woman said.

“My baby will be five  months old. Am I being unreasonable to think she’s maybe being a little bit unreasonable about this? She could have just allowed her best friends with their children,” the woman said.

“I would skip the wedding entirely,” came one reply.

“I struggled to leave my five month old for an afternoon. Impossible if you breast feed. I wouldn’t go,” said another.

I don’t have issues with child-free weddings but I think it’s cheeky to ask people to travel and leave their children behind for several days.

“I don’t in general have issues with child-free weddings but I do think it’s cheeky to ask people to travel and leave their children behind/organise childcare for several days,” another user added.

Another accused the bride-to-be of trying to reduce numbers “by stealth”.

“Has she considered that people with small babies might not attend? Could she be trying to reduce numbers by stealth?” they asked.

Some did see both sides of the argument, though, with one woman admitting the bride may not want her wedding “ruined by wailing babies”.

“Not a chance would I leave my five month old baby to go to the wedding of a friend, no matter how ‘good’ (and frankly inconsiderate) the friend is,” added another.

“So she’s getting married abroad, over the school holidays, but has banned children and is getting a pout on that people might not attend? She’s going to have a very empty wedding I reckon,” concluded another.

What would you do? Tell us on our Facebook page @EntertainmentDailyFix.