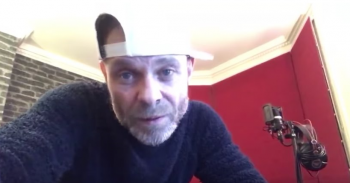 Police were called to his London home

Former East 17 star Brian Harvey has reportedly been hospitalised after police were called to his home following concerns for his wellbeing.

The pop star sparked worry when he shared a video online and spoke about his financial stresses.

In the YouTube video Brian reportedly lamented over his money worries and asked for a meeting with Prime Minister Theresa May.

Police attended the 45-year-old’s home in North London after an alarm was raised and he is now being looked after in hospital.

The Metropolitan Police released a statement explaining they were alerted to a man threatening to take his own life.

They said in a statement: “At approximately 1809hrs on Thursday, March 21 police were alerted to a man threatening to take his own life.

“Officers subsequently attended an address in Walthamstow to complete a welfare check.

“The man arrested has been taken to hospital for a mental health care assessment. There are no reported injuries.”

The news comes almost a week after Love Island star Mike Thalassitis took his own life. He was just 26.

Brian’s ex-girlfriend Danniella Westbrook has voiced her concern for his welfare. The 45-year-old begged to know how he is doing after the incident.

She tweeted after the news: “I’m in rehab just come out of an aa meeting been in hospital all day myself I really hope this is a hoax as if it’s not my heart will be broken…”

She added: “Brian is a good good man and if this is true I hope he gets the help he needs, please dm me…

“Please if anyone has any news on Brian Harvey contact me thanks x my prayers heart and thoughts are with him x I pray he’s ok x.”

In another message she told Brian “you’re loved”.

Brian Harvey in hospital after police called to his home over worrying video https://t.co/Z1BbU3BaI1 my heart is 💔 I wish you better B, please get well and know your very very loved ❤️ you are so talented and have a ❤️ of gold. Sending you all my prayers and love 💕

Read more: Police confirm cause of death of Mike Thalassitis

Brian has been out of the spotlight for a while. He was at the height of his fame when E17 hit the big time in the early to mid 90s.

Last year, he concerned fans when he said he hadn’t left his home in years.

He said online: “I’ve been a prisoner in my own home now for about five years.

“I’ve got to be trapped, like a prisoner, in my own home after selling 22million records. I’ve never done nothing to no one. I just chose not to get involved.”

Ent Daily has contacted a representative for Brian for comment.