The professional dancer, who was axed from the BBC One competition last week, took to Twitter to deny the claim.

Brendan, 41, had fuelled speculation he agreed with a boycott after ‘liking’ some tweets from fans saying they wouldn’t watch Strictly without him on the show.

But the dancer later returned to the social media site to clarify his position, after reading a report that he was backing a viewer boycott.

“I love Strictly and the people on it and I’m incredibly proud of my 15 series. It’s an incredible show that everyone should continue to watch.”

Fans were quick to rally around Brendan, praising his dignity at how he’s handling his Strictly axing.

Many also said even if he didn’t agree with a boycott, they truly didn’t think the show would be the same without him.

One wrote: “It will be hard to watch without you Brendan. Lost its sparkle now. It is a great show though xxxx.”

Brendan also rubbished claims he’d been snubbed by his fellow Strictly dancers, after a report circulated that very few fellow pros had reached out to him. 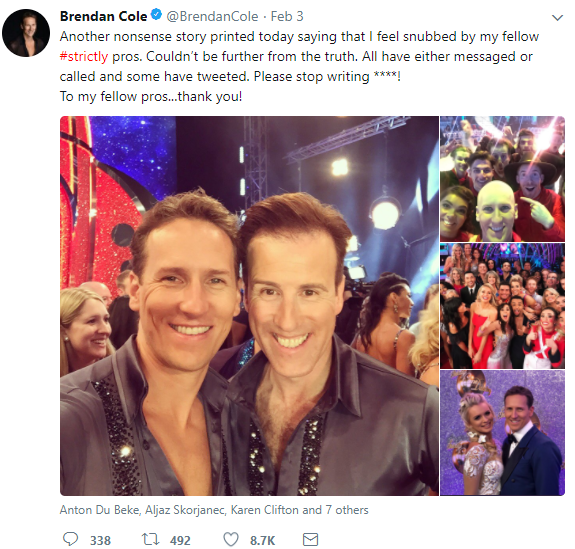 He tweeted: “Another nonsense story printed today saying that I feel snubbed by my fellow #strictly pros. Couldn’t be further from the truth. All have either messaged or called and some have tweeted. Please stop writing [bleep]! To my fellow pros… thank you!”

And, proving his point, many pro dancers took to Twitter to wish him well.

Meanwhile, it’s been reported that Brendan is hugely in demand following his Strictly exit.

What should Brendan do now? Leave us a comment on our Facebook page @EntertainmentDailyFix and let us know what you think!