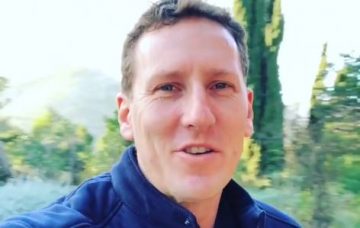 Move along, people, nothing to see here

Brendan Cole has denied he was axed from Strictly Come Dancing after breaking protocol by asking Camilla, The Duchess of Cornwall to dance.

The professional dancer’s rep hit back at claims Brendan swooped in for a waltz with Camilla while filming the show’s Christmas special last year.

According to The Sun, it had been pre-arranged that Strictly judge Craig Revel Horwood would ask Camilla to dance, but Brendan darted in and got there first.

An insider snitched: “Everyone was outraged by the cheek of his actions, he always has to be centre of attention. It was the final straw for everyone involved with the show and the BBC.”

However, a representative for Brendan said: “I can confirm that these assertions are absolutely, categorically untrue. There was no such brief from BBC.”

Brendan, meanwhile, shared a photo of himself dancing with Camilla at the time of the Christmas special filming, telling fans: “I love this. I asked the delightful Duchess of Cornwall if it was okay to ask her, to ask her to dance? Luckily she said yes to both. What a charming host and a wonderful day at Buckingham Palace.”

So far, Brendan hasn’t referenced the allegations on his Twitter account, instead focusing on his current tour.

His All Night Long tour kicks off a string of dates in Scotland tonight, before returning to England for another batch of shows.

He and wife Zoe are also getting ready to welcome a second child.

The couple, who are parents to daughter Aurelia, five, announced the pregnancy back in September, so there’s not long to go now!

Brendan revealed in January that he’d been let go from Strictly, despite being with the show since it launched in 2004.

In an emotional interview with ITV’s Lorraine, he said: “This is quite hard to talk about. The BBC haven’t renewed my contract – we get renewed year on year – and they made an editorial decision not to have me back on the show.

Read more: Carol McGiffin reveals how she’s planning to attend her OWN funeral

What should Brendan do now? Leave us a comment on our Facebook page @EntertainmentDailyFix and let us know what you think!