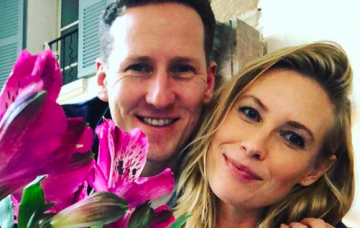 We can't see any marriage problems over here

Professional dancer Brendan and wife Zoe have hit back at allegations of marriage woes by posting a romantic picture on Instagram.

Wellness blogger Zoe added a shot of herself being hugged by her husband of eight years – who is currently away on tour – adding the caption: “Not long now my love @brendancoleinsta! Beach days are coming. Cannot wait!”

Brendan, 41, who is currently on an epic solo tour around the UK, reposted the picture for his 85k followers.

It comes after The Sun reported on Friday that Brendan and Zoe’s relationship has been under strain as he spends time away, working on his dance show All Night Long.

We’re glad to hear all is absolutely fine – not that we ever doubted it!

It comes barely two days after they announced the birth of their second child, baby boy Danté.

On Friday, the dad-of-two posted a picture of all the presents his newborn has received, writing: “Massive thank you to my wonderful cast and crew for the presents for our brand new Danté and even one for Aurélia. Amazing. Thank you all.”

“Thanks for all your kind comments on the arrival of our baby boy. We’re all super in love with him especially big sister Aurélia who can’t bare to let him out of her sight.

“He came right when I asked him to on Daddy’s day off. The power of the mind and the universe is good like that 😜 #newbaby #babyboy #babynews #familyoffour #lifeisgood #tiredmummy #babybubble #tinydancer”.

In a recent interview Brendan, who was axed from Strictly last month after 14 years on the show, admitted touring was difficult to combine with family life.

He said: “I separate the two. To do the two together, would be very difficult.

“You come off the stage and your adrenaline’s pumping and you don’t want to go to sleep for at least three hours. I wouldn’t be in bed before two o’clock on a show day just because your adrenaline does not stop. So that is not conducive to family life.”

The dancer and his former model wife – who married in July 2010 – announced last September that they were expecting a sibling for their daughter, Aurelia, five.

Brendan said in an Instagram post at the time: “Hey all…@thezoecole and I have news…” as he shared a video of Zoe smiling and pointing to her baby bump.

Zoe shared a picture of her and Brendan looking at her bump with the caption: “Where did that come from?!”

Do these two look unhappy to you?! Leave us a comment on our Facebook page @EntertainmentDailyFix and let us know what you think!