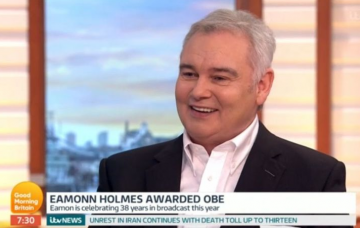 She could be royally annoyed!

Ruth Langsford was evidently thrilled when her husband and This Morning co-host Eamonn Holmes was awarded an OBE in the Queen’s New Year Honours.

Shortly after the announcement was made on Friday, the 57-year-old tweeted to say how proud she was of her fella’s achievement.

However, the smile may have been wiped off Ruth’s face after Eamonn, 58, revealed some bad news during an interview on today’s Good Morning Britain.

The loveable presenter was telling Ben Shephard and Charlotte Hawkins about the forthcoming ceremony at Buckingham Palace.

Now, you’d expect Ruth to be right there by his side as he receives his prestigious accolade from Her Majesty. But apparently, Eamonn has other ideas…

He explained: “My daughter loves the royals, so I’d like her to be there. My son Jack wanted to be there, too. So Ruth might have to stand aside – and she would do that.”

He added: “If we had three tickets, that would settle it, but really we need about 17!”

Quite how Ruth will take the news is anyone’s guess. She certainly sounded like she was ready to dust off her best frock and hat when she sent that sweet social-media message at the weekend.

She tweeted: “SO proud of my husband @EamonnHolmes. All his years of broadcasting rewarded with an OBE!!! Congratulations darling x.”

During his stint on GMB, Eamonn showed why he’s so popular with viewers at home. He was on fine form, and had us chuckling as he made a stunning confession about his wife.

Referring to what the couple had been up to during the festive period, he laughed: “There’s an exclusive video recorded by me in which [Ruth] tries to murder her mother.

“Watch that at 10.30am on This Morning. Ruth tried to murder her mother. It’s shocking. It’s disgraceful!”

Earlier this week, it was claimed that Eamonn had turned down an £800,000 offer from Channel 5 to appear in the next series of Celebrity Big Brother.

The Daily Star quoted a source as saying: “Eamonn has turned down a number of offers over the years. This one is the biggest so far at £800,000.

“But no amount of money could tempt him. He’s said it isn’t about the money, because he doesn’t need to earn more cash than he already does through his TV projects.”