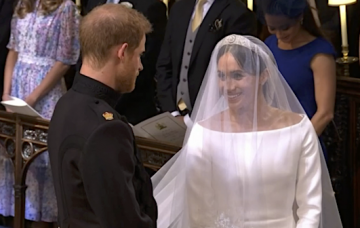 They are officially husband and wife!

Prince Harry and Meghan Markle are officially husband and wife!

As they headed out of St George’s Chapel just after 1pm, the couple shared a kiss on the steps in front of the crowd.

As Harry leaned in for a smooch, the crowd erupted into cheers.

In 2011, Harry’s brother Prince William and his wife Kate Middleton had their kiss on the balcony of Buckingham Palace.

Earlier this year, Meghan and Harry said they wanted the public to “feel part of the celebrations,” so it’s not a surprise that they decided to share their kiss with the crowds of people outside the Chapel.

Before today, there were many suggestions as to where the newlyweds would have their kiss.

Royal correspondent Victoria Arbiter suggested they would share a kiss on their carriage parade around the town of Windsor.

She told the Express: “This couple are so touchy feeling, so incredibly tactile. I’m hoping we might get a couple of kisses on the carriage ride.

“It’s about a two-mile ride through Windsor, post wedding, so I think we might see a kiss then.”

But royal commentator Richard Fitzwilliams’ prediction was spot on!

He believed the “significant and historic” moment would happen on the steps of St George’s Chapel.

Prince Harry arrived at St George’s Chapel at 11:40 am alongside his brother and best man Prince William.

The Queen and Prince Philip arrived shortly after.

At around noon, Meghan arrived at the chapel and showcased her stunning gown.

Her dress was designed by British designer Clare Waight Keller for Givenchy.

The couple will now embark on a two-mile parade through the town of Windsor.

The route will see the newlyweds tour through Windsor’s historical streets, allowing the public to catch a glimpse at the couple and share the special day with them.

The couple will travel from St George’s Chapel through Windsor Town before returning to Windsor Castle along The Long Walk.

Kensington Palace previously said the couple hope the carriage procession will “provide the opportunity for more people to come together around Windsor and to enjoy the atmosphere of this special day.”