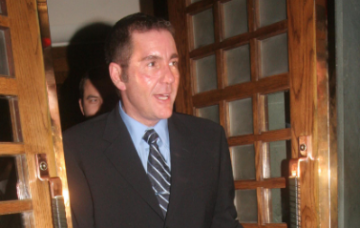 His agent has confirmed the sad news

Presenter Dale Winton has died at the age of 62, his agent has announced.

“It is with great sadness that we can confirm the passing of Dale Winton who died at home earlier today,” said Jan Kennedy.

Dale also hosted National Lottery show In It To Win It and Hole In The Wall.

Fans were delighted to see his comeback, which saw him visit Walt Disney World in the first episode of four.

It had been two years since Dale was last on our TVs.

The presenter revealed to whatsontv.co.uk that his absence from the entertainment world had been because of ill health.

He said: “I had about four surgeries. I had a shoulder problem and a knee problem, so I took a break to get myself sorted.”

The cause of Dale’s death is not yet known.

Tributes from the showbiz world began to pour in moments after the sad news broke.

So sad to hear about Dale Winton .A lovable and warm entertainer . Thanks for letting me go Wild In Your Aisles .
RIP lovely Dale.

So very sad about the gorgeous Dale Winton worked with him many times ! 62 is no age it’s hard to believe he’s gone . Good night lovely man xxxxx

So sad to hear that the true gentleman, the charming and so kind Dale Winton has been taken from us far to soon. RIP lovely man. Xx

I am so so so sad to hear about Dale Winton 💔 a lovely, warm, kind, sensitive, generous soul with a touch of naughty ! RIP 🙏🏻

So so sad and shocked about the lovely Dale Winton. God bless ❤

Why did Anne-Marie Duff and James McAvoy split and who is the Salisbury Poisonings star dating now?