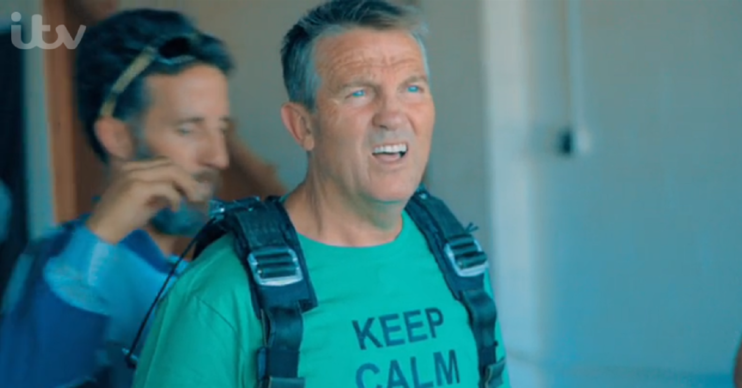 Bradley Walsh & Son: Breaking Dad returned to screens last night, taking viewers back to the open road with The Chase host and his son, Barney.

The programme, which started on ITV on Wednesday (June 10) evening, comprises all the episodes from series one and two, plus a special episode featuring previously unseen footage from their trips across America.

What happened in Breaking Dad?

The first episode covered Brad and Barney‘s their journey through Los Angeles and from there to Arizona.

And one part of the show had viewers in hysterics all over again.

“Look at the state of it!” Bradley moaned as he saw the tiny aircraft they would be jumping out of. “It’s like an Airfix kit. I can’t go up in that.”

When they got up in the air, Bradders looked terrified but Barney didn’t break a sweat.

“I love you, dad. And I’m so proud of you,” Barney said, before leaping from the plane.

Barney laughed and screamed the whole way down, while Bradley clung to the straps of his harness in grim silence.

Once they had landed, Barney whooped and threw his arms around his dad, who gasped: “I need a drink…”

Reacting on Twitter, one viewer said: “#BreakingDad is some laugh.”

Another tweeted: “Proper belly laughing at their antics.”

Someone else wrote: “Bradley… ‘It’s like an Airfix kit, I can’t go up in that!’ lol #breakingdad.”

Bradley .. 'Its like an Airfix kit, I can't go up in that!' lol #breakingdad

Others were overjoyed to have it back on their screens, despite it being a repeat.

“Catching up with #bradleywalshandson #BreakingDad,” said one. “Barney is so like his dad. It’s the best laugh I’ve had in ages watching it. Can’t wait until next week for another episode.”

‘So happy it’s back’

“I adore the way @BradleyWalsh and his son #BarneyWalsh bounce off each other in this show,” wrote another. “I’m so happy that it’s back! Snuggled up on the sofa with a glass of wine ready to watch! #WineWednesday.”

“Watching (again) #BreakingDad with Bradley and Barney,” a third tweeted. “Absolutely love watching these two together.”

Catching up with #bradleywalshandson #BreakingDad 😊😂 Barney is so like his dad it’s the best laugh I’ve had in ages watching it 😂. Can’t wait until next week for another episode 💜

Elsewhere in the episode, the duo tried their hand at weight lifting at LA’s Venice Beach and water skiing on a lake in Arizona.

They also became cow hands for a day, donning their jeans and cowboy hats and saddling up to learn how to lasso cattle.

Are you watching the series again? Leave us a comment on our Facebook page @EntertainmentDailyFix and let us know.