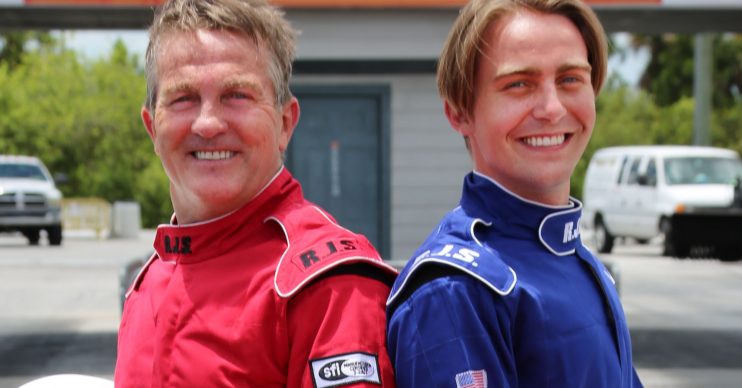 The new series started on Wednesday

ITV viewers were delighted to see presenter Bradley Walsh and his son reunited for a new series of their road trip show, Breaking Dad.

The first installment, which got underway last night (08.01.20), saw Bradley and 21-year-old Barney arrive in Florida on a mission to soak up some of the amazing experiences on offer in America’s Sunshine State.

Over the course of the series, the duo will travel almost 3,000 miles through the east coast states of the US, from Florida all the way north to Maine.

But a number of viewers took to Twitter to call on ITV to make one big change to the programme.

Breaking Bad is on for just 30 minutes, including all the ad breaks, and fans of the show think it should be longer.

Love the show but half hour is way too short.

One tweeted: “#BreakingDad such a great watch. We need this to be on longer…”

Another said: “@ITV #breakingdad needs to be longer and less ads please, love it sooo much.”

A third wrote: “Love the show but half hour is way too short #BreakingDad.”

#BreakingDad such a great watch. We need this to be on longer…

Love the show but half hour is way to short #BreakingDad

“Just love #BreakingDad, what a really great show. Wish it was an hour long @BradleyWalsh,” said a fifth.

Another tweeted: “Defo needs to be on for more than half an hour #BreakingDad.”

Just luv #BreakingDad what a really great show. Wish it was an hour long @BradleyWalsh

In the first episode, Bradley and Barney saw the house of Nobel Prize-winning writer Ernest Hemingway and even visited Sloppy Joe’s – a bar said to have been given its name by the celebrated author of The Old Man and the Sea.

Later, Barney surprised his dad by treating the Doctor Who actor to a terrifying shark diving experience.

Bradley Walsh is best known as the host The Chase. He’s presented the programme since its inception in 2009 and has shown no signs of stepping down any time soon.

But chaser Mark Labbett thinks he knows exactly who would to replace Bradders if he decided to step away from the popular ITV quiz show.

Speaking on Loose Women last year, the Beast revealed he thinks Barney would be the one to take over from Bradley, as he told the panel: “I have a theory. It’s a bit of a mad theory. I reckon Bradley’s going to keep doing it until his son, Barney, is ready to take over.”