Fans of ITV's Breaking Dad were divided last night after watching Bradley Walsh injure himself at a rodeo.

On Wednesday's (29.01.20) episode, The Chase presenter and his son Barney donned their cowboy hats, belts and boots to attend a good old-fashioned rodeo. 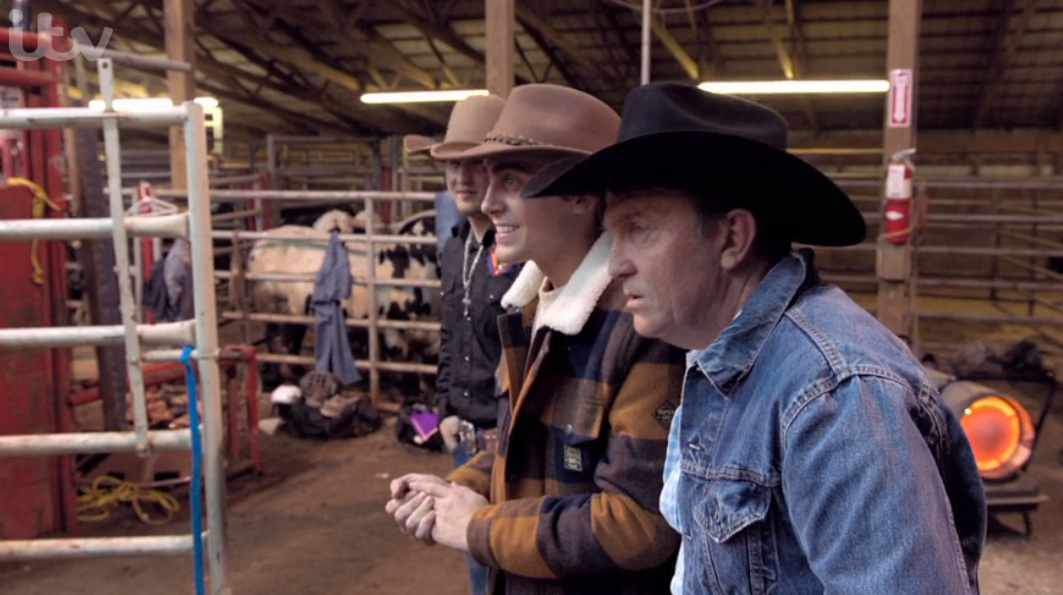 This week, the duo attended a rodeo (Credit: ITV)

Read more: Breaking Dad: Viewers in stitches as they beg ITV for more of Bradley Walsh and his son

Barney was keen to get his dad fully involved in the event and seemed to have no qualms getting him on the back of a massive, bucking bull.

The 22-year-old was first up and lasted just over two seconds before being thrown from the animal.

When it was Bradley's turn, the presenter looked nervous as he lowered himself onto the bull. And when the gate was opened and the animal started bucking and spinning, Bradders was quickly thrown and landed heavily on his back. 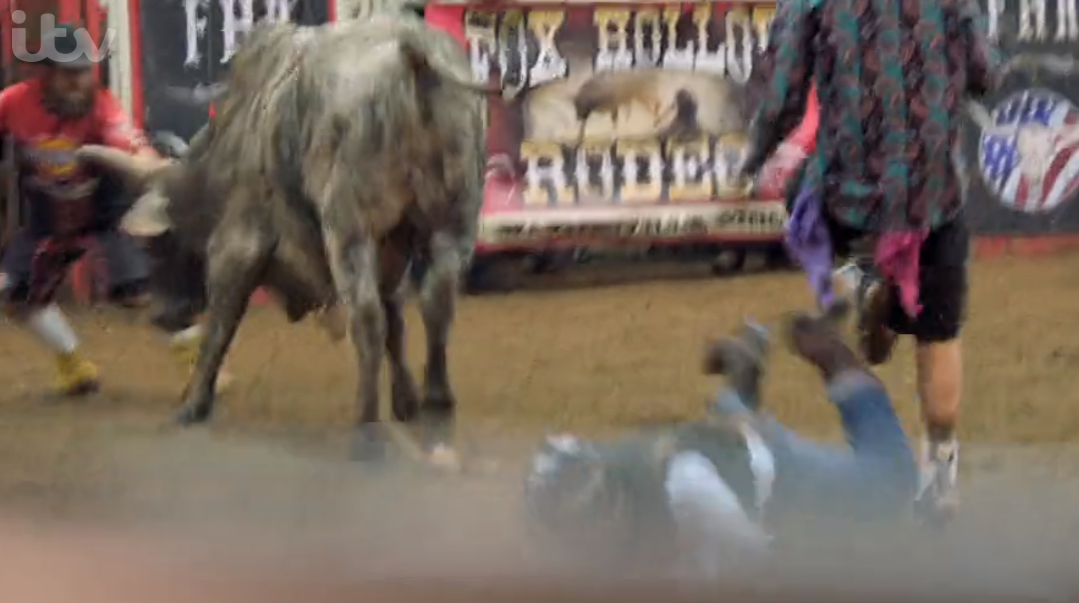 Bradley injured himself falling off a bull (Credit: ITV)

Barney watched nervously from the sidelines, concern etched all over his face as his old man, visibly hurt, was escorted to safety.

He kept assuring Barney he was all right, although he continued to groan in pain. 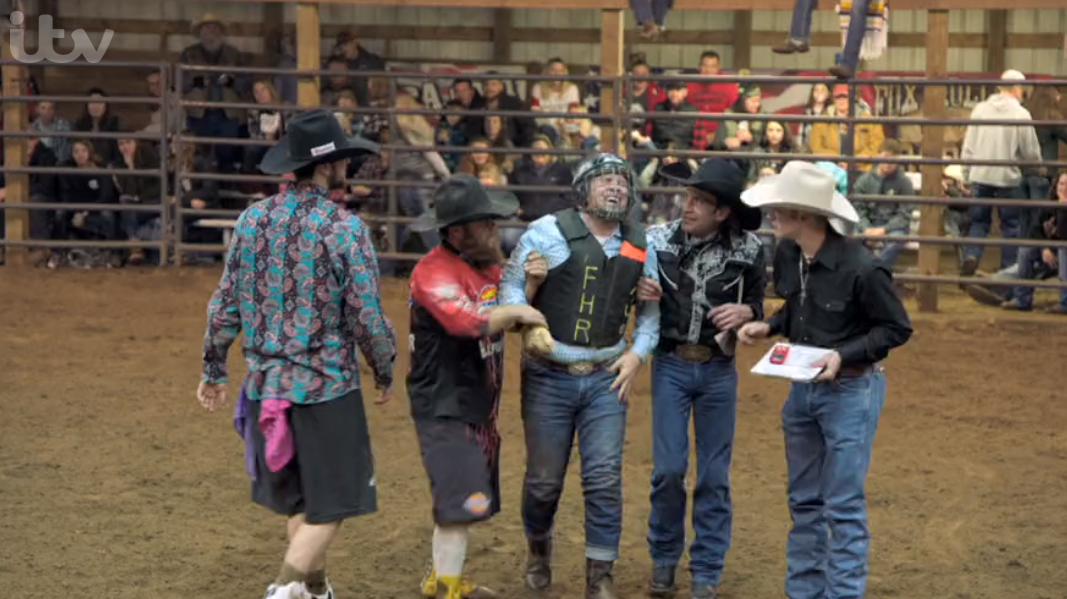 He was visibly in pain as they escorted him to safety (Credit: ITV)

When the scene switched to the pair in hospital, it was explained that Bradders - as he revealed in a recent episode of This Morning - had sustained several small breaks in his back.

Barney was clearly worried for his dad, as he said: "Yeah, we might have taken it too far this time." 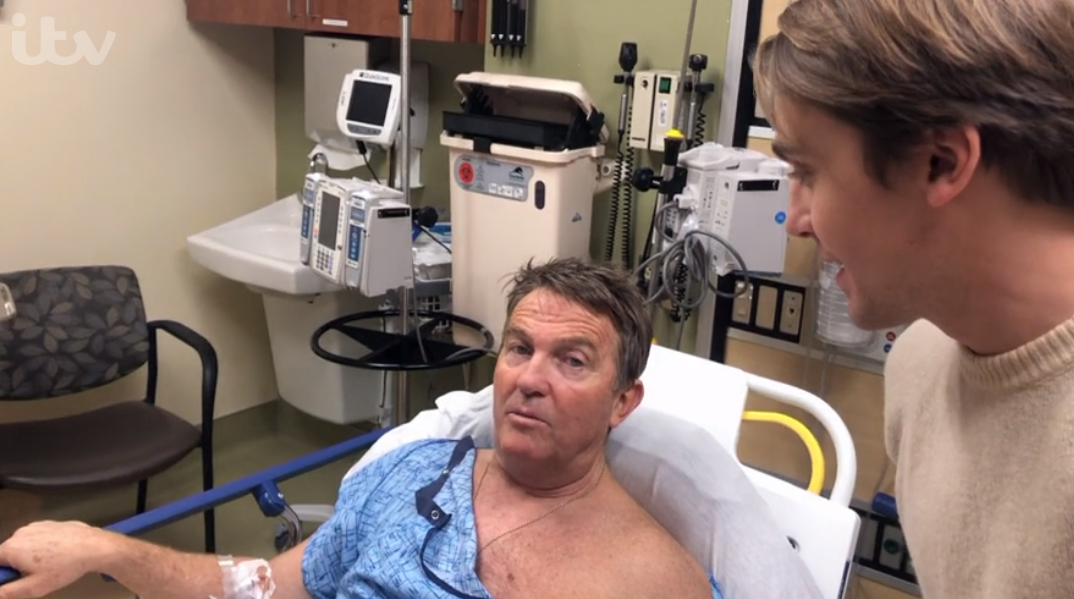 He broke his back in several places (Credit: ITV)

But he nevertheless received criticism on Twitter from viewers who thought he shouldn't have put his dad - who turns 60 this year - in danger.

One said: "Barney shouldn't have taken his 60-year-old dad on a bucking bronco in the first place, but you could see how concerned he was and it melted me."

Could have been life-changing injuries.

Another wrote: "Barney, why did you encourage him? Naughty boy. #BreakingDad Hope there's no lasting damage, Brad."

A third tweeted: "That Barney is an idiot putting his dad in so much danger. Just for a TV show. He likes to see his dad suffer. Could have been life-changing injuries. Let's hope he's proud of himself. #breakingdad."

But someone else told them to "chillax" and pointed out that it's highly likely everything the pair do is planned well in advance with producers.

Barney shouldn't have taken his 60 year old dad on a bucking bronco in the first place, but you could see how concerned he was and it melted me 😭😭 Barns is now my weird crush. #BreakingDad

Barney, why did you encourage him. Naughty boy. #BreakingDad Hope there’s no lasting damage, Brad. 💖

Everything they do is, I’m sure, planned well in advance and discussed with the producers. Chillax

Other viewers, who seemed not to mind what they saw at the rodeo, heaped praise on the duo and their "wonderful" father-son relationship.

"Love watching #BreakingDad," said one viewer, adding: "How can you not love Bradley and Barney?"

"#BreakingDad is a great and fun show," said another. "Enjoy watching it, Bradley and Barney are great on it."

Someone else said: "Brad and Barney have such a wonderful healthy relationship. Sadly not typical of most father/son relationships. A great show, always worth watching."

Love watching #BreakingDad - How can you not love Bradley and Barney

#BreakingDad is a great and fun show , enjoy watching it Bradley and Barney are great on it

Is anyone else loving #BreakingDad ? Brad and Barney have such a wonderful healthy relationship. Sadly not typical of most father/son relationships. A great show, always worth watching.

What did you think of the rodeo scene in last night's episode? Leave us a comment on our Facebook page @EntertainmentDailyFix and let us know.

Does Fingers die in Our Girl? Sean Ward's possible departure is devastating fans