Bradley Cooper becomes a dad for the first time!

The actor and his supermodel girlfriend have had a baby

The Oscar-nominated actor and his stunning girlfriend of two years Irina Shayk welcomed their baby two weeks ago, according to US magazine, People.

Can you imagine how gorgeous that little one is going to be?!

This is the first child for Russian supermodel Shayk, 31, and Cooper, 42.

The new parents have been dating since October 2015 and did a Cheryl by never officially announcing that they were expecting.

Although, the leggy brunette paraded down the Victoria’s Secret Fashion Show catwalk in 2016 sporting a rather prominent bump.

If only we all looked this good while pregnant…

Shayk was recently spotted in an all-black ensemble during a trip to Disneyland, wearing a pair of Minnie Mouse-ears and even met Pluto.

When ur stuffing ur face and Pluto comes by 🙄😂

Although the Silver Linings Playbook star wasn’t with her during her day of magic, sources have said that the couple are besotted with each other.

“He has been spotted dropping her off at the airport with kisses as she is about to take off for another job,” the source explained. “They are just a very sweet couple.”

Shayk and Cooper now live in L.A together and try to have as normal a life as possible. “When they are together in L.A., they are very low-key and mostly hang out at home,” the insider added.

The new mum, who is very active on Instagram, has stayed super quiet over the baby’s birth over the past couple of weeks, and has instead uploaded photos of editorial work she’s done.

The only celebrity to wish the couple congratulations so far is TV host Ellen DeGeneres, who hilariously tweeted: “Congrats Irina Shayk and Bradley Cooper on your baby! Bradley, you’re going to be a wonderful dad. Just don’t take the baby to Vegas.”

The Vegas joke was in reference to his movie The Hangover. 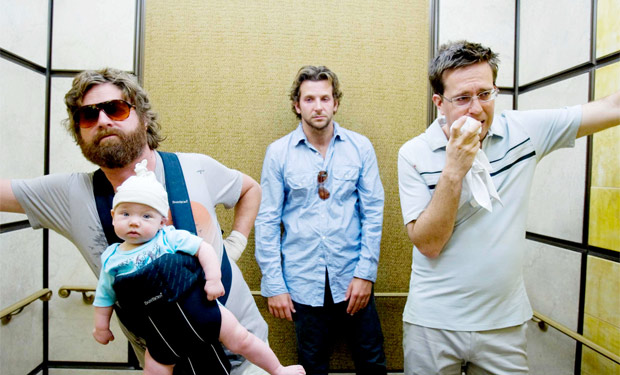 Read more: Simon Cowell reveals the advice he gave Mel B over her dad’s death

While it is unknown whether their little tot is a boy or a girl, there is no doubt it’s going to be a cutie.