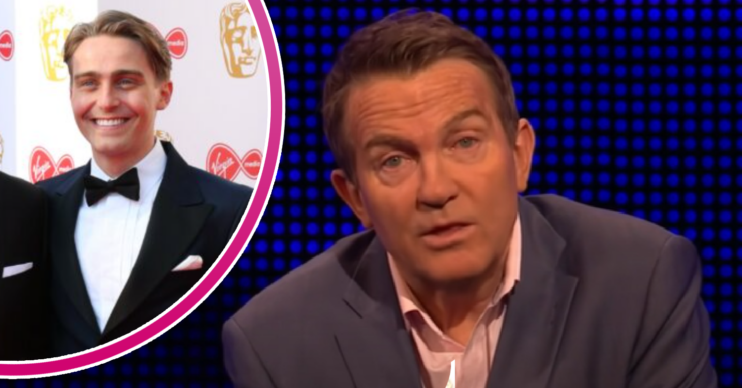 Bradley Walsh previously admitted he wants to be more like his son Barney, in a moving admission.

The Chase host, 62, was speaking to Jonathon Ross about his relationship with his son when he made the heartfelt comment.

Appearing on The Jonathan Ross Show in December last year, he spoke about working again with his son on ITV’s The Larkins.

Speaking about Barney, he said: “We do [get on well].

“He’s a great lad Barney. I’ve said it on many occasions – he’s the person I always wanted to be.

“He’s got wonderful humility, he’s very sensitive. He takes after his mum, thankfully.

“He’s much more gentle than I am.”

Barney, 24, plays PC Harness on the show, which is set to return later this year.

More recently, the dad-of-two made an amazing gesture to his son.

Earlier this week, it was reported that he gave his son half his fortune, after making him the director of two of his companies.

It’s claimed he handed his son half of his £14m fortune. He is now a director for Wingit Productions Ltd and Barnstormer Holdings Ltd – meaning he is jointly in control of the companies with his dad.

One of the companies, Barnstormer has assets worth £1.86m. It reportedly bought a 44-acre forest in Epping three years ago, but the reason for it hasn’t been disclosed.

Wingit Produtions is the firm that deals with Bradley’s TV earnings – mainly from The Chase and other spin-offs.

Its latest accounts say it has assets worth more than £12.5 million.

Bradley has also responded to accusations about the speed he reads the questions on The Chase.

After viewers complained, he explained that the average time to read a question and get an answer is between 3.6 and 4 seconds – very precise!

He previously told Radio Times: “If you’re a contestant and I go ‘What’s… the capital… of France…’, they’d be dead and buried in 30 seconds.

“I have to make sure they get up to speed and they’re getting about 18 or 19 questions answered correctly. That’s the real banana skin score.”

The Chase Celebrity Special is on today (July 31) at 3pm on ITV.