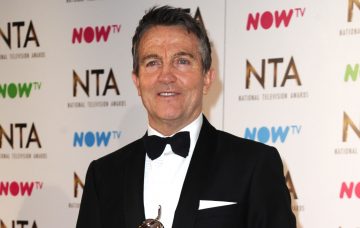 All grown up, all dressed up!

Coronation Street star Bradley Walsh has thrilled fans by sharing a shot of himself standing with his lookalike son, Barney on the red carpet.

The pair were attending the National Television Awards, where Bradley was nominated for best presenter.

Bradley posted a photo of the pair to his newly-created Instagram account (blame Holly Willoughby!) showing them looking suav  in their suits ahead of the awards.

The image was captioned “Sorry for late post gang (think that’s what it’s called) but at last I’ve finally come round… Here’s me and @barneycpwalsh last night in the calm before the storm.”

He also jokingly begged for help using instagram claiming he “ain’t got a clue!”

Barney posted his own shot to Instagram as well, showing his mother Donna standing between her son and her husband.

Ant used his speech to acknowledge his “emotional” year – which saw him go through rehab to deal with an addiction to prescription painkillers and ended with divorce from his wife of 11 years, Lisa Armstrong.

“I’m emotional, very emotional,” he said. “Because of the last 12 months what I’ve been through, winning this award is particularly emotional for me.”

Read more: Shayne Ward hits back at claims he rowed with fiancée Sophie Austin at NTAs

Speaking to The Sun later in the evening he claimed he might give the ceremony a miss in the future.

“I might not come next year,” he said. “I tell you what, all of this is not doing my heart any good.”

Bradley, meanwhile, didn’t go home from the ceremony empty-handed: he revealed the following morning that Holly had urged him to open an Instagram account, which he did!