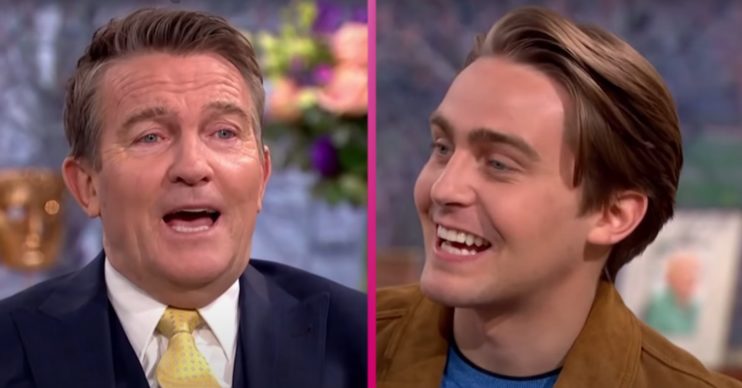 So pleased with their recent success

Bradley Walsh has delighted his fans with a rare appearance on social media.

And Bradley was joined by son – and co-star – Barney Walsh to offer their gratitude to dedicated viewers.

The pair were taking to social media to thank fans for voting for them in the TV Choice awards.

And their loyal supporters’ certainly paid off. It was announced earlier this week that Bradley Walsh & Son: Breaking Dad won the gong for Best Factual Show!

However due to the coronavirus pandemic, the accompanying awards ceremony was cancelled for this year.

I hope the show has inspired some of you to take trips of your own.

And even though Bradley and Barney had already received the physical award, they didn’t have it on them for their address.

A very pleased Bradders told fans he ‘couldn’t believe’ they had won.

Bradley Walsh and Barney Walsh reflect on their win

And a similarly ecstatic Barney added he hoped the show would motivate viewers at home to travel.

Barney said: “I hope the show has inspired some of you to take trips of your own.”

He added: “Obviously when everything’s calmed down a bit!”

Will there be another series of Breaking Dad?

Bradley went on to express how excited they were to be able to say they would back with another run of the show.

“We’re going back on the road!” Bradley cheered.

“We’re going to make another series.”

In the post’s caption, Bradley also indicated he wasn’t aware the win had been announced!

He wrote: “Our first award. Thank you so much for voting for us.

“We were told to keep it under wraps and apparently they announced it Tuesday.”

Problems with the next series

Expanding on the next series, Bradley continued: “It’ll be tricky because of social distancing and quarantine but we will do our very best.

“As Barnes says if it’s inspired anyone to do stuff with their loved ones or reconnect then our job is done.”

Fans were overjoyed to see the duo, with many commenting how they couldn’t wait to see them back on the box.

“Love this, come back soon!” remarked one fan.

“Well deserved. Can’t wait for the next series,” echoed another follower.

And a third person wrote: “You’re the best, boys. Hurry up and be on telly again!”