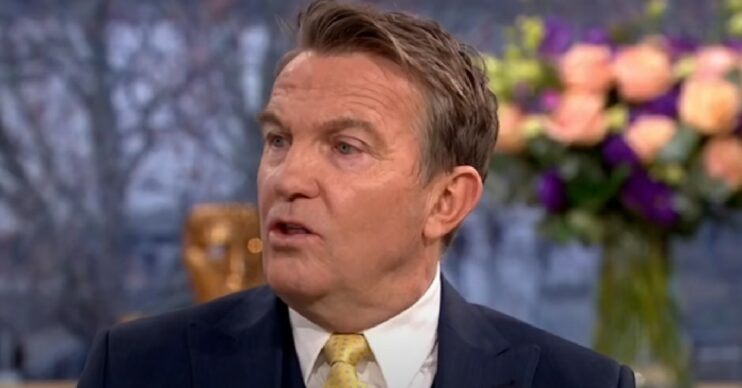 Former I’m A Celebrity star Emily shared photos to her Instagram on Tuesday as she showed off her stunning outfit for Celebrity Juice.

Emily explained that Bradley had ‘gatecrashed’ her dressing room after filming for The Chase.

What did Bradley Walsh do at ITV?

In the first few photos that Emily shared, she was posing in her dressing room in a green floral mini dress.

Emily had her hand rested on Bradley’s shoulder as he looked dapper in a navy suit and pink shirt.

Emily wrote: “Swipe for lovely surprise of @bradderswalsh crashing my dressing room after doing a recording of The Chase in the studio next door.

“I asked if I could be a chaser. I think his face says it all.”

Fans loved the image, with many gushing over Bradders.

Another added: “Love Bradley,” followed by a heart-eyes emoji.

But one person joked: “It’s like a dad standing at the door saying have her back by 10pm not a minute later.”

Bradley is a firm TV favourite after hosting the likes of The Chase and its spin-off show Beat the Chasers.

However, recently, some The Chase viewers have had a complaint about Bradley.

Many have taken issue with a phrase he often uses on the programme while speaking with contestants about their performances.

During various points of the show, viewers spotted that Bradley kept saying to contestants that they’re “better players than that”.

One viewer complained on Twitter: “When Brad says ‘you are a better player than that’ Brad! No they [bleeping] aint!!!!”

Another said: “He’s not a better player or he would have got more right.”