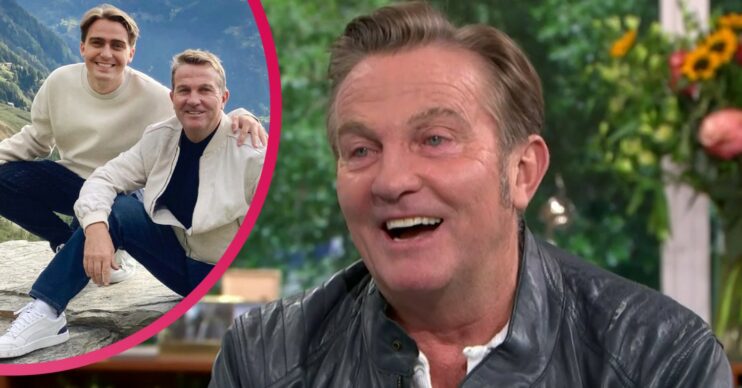 Bradley Walsh has shared an exciting update on the upcoming series of his show, Breaking Dad.

Fans are desperate to see the much-loved presenter back on the ITV programme alongside his son Barney.

During an appearance on This Morning today (October 7), Bradley admitted that preparations are already underway for the fourth series.

The star appeared on the morning show ahead of his new project, The Larkins.

During the chat, host Phillip Schofield asked: “So after [The Larkins] you’re off filming more Breaking Dad?”

Bradley responded: “Actually, I am, you’re right Phil. I’m off to Scandinavia.”

We’re off to Scandinavia

In addition, the TV star shared: “We’re off to Scandinavia and that’s been fantastic. I got a phone call this morning in the car from a couple of companies for me to go New Zealand, saying ‘Can we please bring Breaking Dad to New Zealand?’

“They’re desperate for it, it’s a big hit in New Zealand.”

The Chase star also appeared on the sofa alongside friend and colleague, Holly Willoughby.

The 60-year-old star is well known for attempting adrenaline-fuelled activities on the show.

However, Bradley suffered a nasty head injury last series, whilst clog dancing in the Netherlands.

Speaking with The Sun, he said: “After being thrown out of a plane, climbing up a wall and being thrown off a bull and everything like that, I trip up like an old twerp and whack my head on the menu.”

When does Bradley appear on The Larkins?

The Larkins premieres on ITV on Sunday (October 10), with Bradley taking on the role of Pa Larkin.

Ahead of the first episode, Bradley opened up on filming for the family drama.

During a chat with ED!, he explained that the food on set caused him to gain a couple of extra pounds.

“And that’s despite the training I’ve been doing too.”

He continued: “Jo [who plays Ma Larkin] would bring the food to the table and I would just stay there eating it all!”

But when it comes to filming series two, the star admitted that things will have to change.

He laughed: “I’ll do a series two, but I have to calm down on the eating. I can’t keep going out and buying new clothes that are bigger.

“I’ve got to cut down on the eating.”