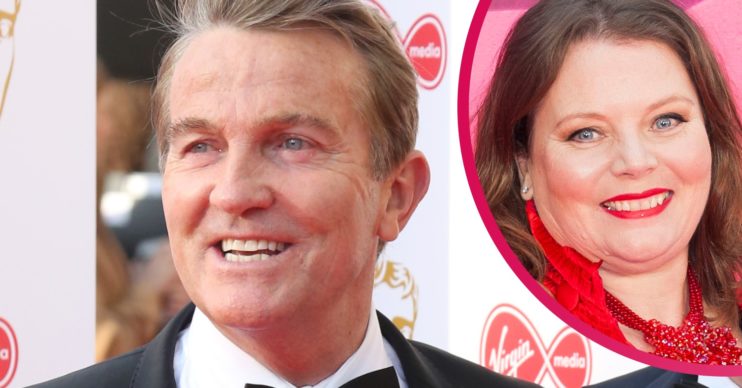 Bradley Walsh drama The Larkins: Who else is in the cast and when does the ITV drama air?

The Larkins, starring Bradley Walsh, is a new drama coming to ITV.

The Chase presenter, 60, will join Joanna Scanlan in the six-part series.

Read on to find out more about the ITV favourite’s upcoming show.

What is new Bradley Walsh drama The Larkins about?

The series centres on wheeler dealer Pop Larkin (Bradley), his wife Ma (Joanna) and their six children – a working-class family in the late 1950s.

In the Kentish countryside, considered the Garden of England, the family has achieved a small patch of paradise. Nothing is wasted and they are able to live plentifully.

The Larkins are good-hearted people, always willing to share what they have with others, but their good heartedness isn’t always shared by other, sometimes snobbish members of their idyllic community.

In addition to their clashes with authority and snooty villagers, The Larkins will feature a love story between Mariette – Pop and Ma’s beautiful daughter – and Cedric ‘Charley’ Charlton. A newcomer, Charley arrives as an unworldly, officious accountant. He is a city man, there to investigate the Larkins’ taxes.

We will be expanding the Larkins’ world a little and can’t wait to immerse ourselves.

However, Mariette soon distracts him and he falls in love with her. But there’s a romantic rival in the village, in the form of Tom Fisher, a handsome and mysterious figure.

Mariette, meanwhile, has plans of her own that don’t involve men.

Is The Larkins based on a true story?

No, the series is a new adaptation of the H.E. Bates novel The Darling Buds of May. Screenwriter Simon Nye (The Durrells, Men Behaving Badly) is penning the drama, while Abigail Wilson (Trollied, Stella) is on board to write one of the episodes.

Simon said: “The novels are short, hilarious and magical. We will be expanding the Larkins’ world a little and can’t wait to immerse ourselves in this glorious countryside idyll.”

The last adaptation of the book and its sequels was 30 years ago with ITV’s The Darling Buds of May – one of the broadcaster’s all-time highest rated comedy dramas.

Who is in the cast of The Larkins?

The series will star Bradley Walsh and Joanna Scanlan.

However, ITV is yet to confirm other members of the cast. It plans to release more names attached to the series closer to filming.

The Chase star Bradley Walsh commented: “I’m thrilled to be asked to be part of this much loved and iconic series of stories. The warmth and affection that H. E Bates has generated through his books is so uplifting and I cannot wait to be part of the Larkin family. It’ll be a hoot!”

Joanna Scanlan said: “What better comfort could there be from all we have endured this year than the rolling laughter and outsize hugs of Ma and Pop? It’s going to be an honour to help bring The Larkins to the nation’s devices!”

When is it on ITV?

An air date is yet to be confirmed.

However, ITV has said that filming is due to start in 2021.

Andy De Emmony (The Nest, Kenneth Williams: Fantabulosa) will direct the series, while Serena Cullen (Me and Mrs Jones, Lady Chatterley’s Lover) is with the project as a producer.

Read more: The Chase: Shaun Wallace stuns viewers as he runs out of time in ’10-year first’

Ben Farrell, Objective Fiction CCO, said: “I’ve loved the Larkins novels for many years and can’t think of a better time to be bringing them back to television. After the year we’ve all had it’s welcome pure escapism for a family audience.”

Who was in the 1990s series of The Darling Buds of May?

They starred alongside Hollywood actress Catherine Zeta-Jones, who was Mariette, and Philip Franks, cast as Charley.

Are you excited for the new Bradley Walsh drama? Leave us a comment on our Facebook page @EntertainmentDailyFix and let us know.