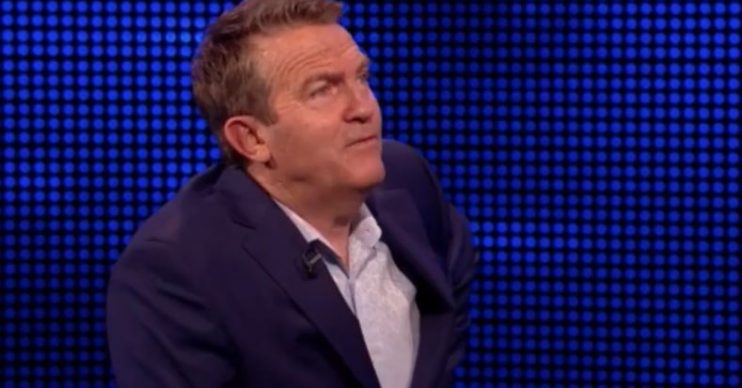 Not everyone's as brainy as you, Mark

A frustrated Bradley Walsh was forced to interrupt The Beast on a recent episode of The Chase when he didn’t like one of the quizmaster’s answers.

The host, 59, had to cut in when Mark Labbett, 54, tried to explain his answer to a question on the hit ITV game show – but left everyone even more confused.

In an episode aired on Monday (21.10.19), contestant Kate was up when Bradley broke off from the usual proceedings to ask Mark what he knew about converting temperatures between Fahrenheit and Celsius.

In response to the host’s question, Mark replied: “To go from Fahrenheit to Celsius, you take 32 off and then multiple by five nine, so multiple by five, divide by nine…”

But Bradley, clearly confused already, cut him off and said: “Woah, woah, woah! That’s not simple!”

That’s multiple by one-point-eight and then add 32.

The Chaser was nonplussed and insisted “it is simple” as he pushed on with his explanation to revealed how to do the calculation in reverse.

He said: “The easy one is to go Centigrade to Fahrenheit. That’s multiple by one-point-eight and then add 32.”

Mark Labbett joined The Chase when the show launched in 2009 and has amassed an army of fans in the years since.

Earlier this year, he opened up about some of the weird and wonderful requests he’s received from viewers.

He said in a conversation with Digital Spy: “The weird [fans] are the ones that ask me to pick them up.

“I made a promise I would only do it with the people I love and secondly, I am getting old.”

Mark, who is a popular presence on the student circuit and makes appearances at universities for freshers weeks, continued: “But some people can’t take [no] for an answer. It’s fun though, you get all the weird and wonderful shots. It’s lovely meeting all the students though.”

Last month, he appeared on Loose Women and revealed who he thinks is likely to take over as presenter of The Chase when Bradley Walsh eventually steps down.

Explaining his “mad” theory on the programme, Mark said: “I have a theory. It’s a bit of a mad theory. I reckon Bradley’s going to keep doing it until his son, Barney, is ready to take over.”