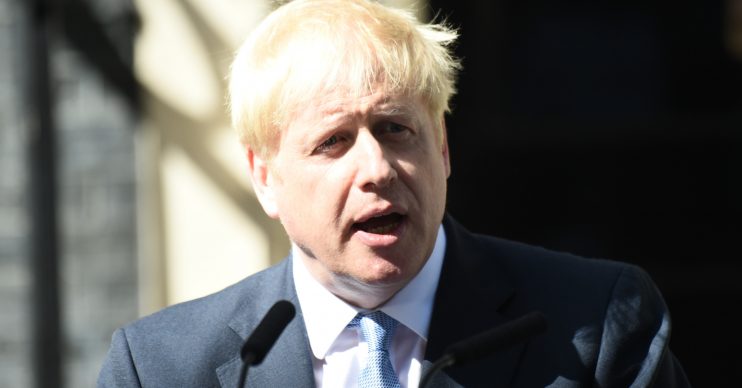 He was announced as Britain's new Prime Minister on Tuesday

The Queen has formerly appointed Boris Johnson as Prime Minister of the UK as he met her at Buckingham Palace today.

On Tuesday, Mr Johnson was voted the next Conservative Party leader and Britain’s next Prime Minister.

Mr Johnson was officially appointed the role minutes after Theresa May gave her resignation to Her Majesty on Wednesday afternoon.

Shortly after, Royal officials released a photo of the new PM bowing to the Queen and shaking her hand.

A Buckingham Palace statement read: “The Queen received in Audience The Right Honourable Boris Johnson MP this afternoon and requested him to form a new Administration.

“Mr Johnson accepted Her Majesty’s offer and kissed hands upon his appointment as Prime Minister and First Lord of the Treasury.”

After a 30-minute meeting with the Queen, Mr Johnson left Buckingham Palace and arrived at his new home of 10 Downing Street, where he gave a speech to the nation.

He said: “The doubters, the doomsters, the gloomsters – they are going to get it wrong again. We are going to restore trust in our democracy.”We will do a new deal, a better deal that will maximise the opportunities of Brexit while allowing us to establish a new partnership with the rest of Europe.

“I have every confidence that in 99 days we will have cracked it. My job is to serve you the people – the people are our bosses.”

He also echoed his vow to take Britain out of the EU on October 31 “no ifs, no buts”.

The Conservative MP for Uxbridge and South Ruislip beat out current Foreign Secretary, Jeremy Hunt, in a two-man leadership battle voted for by around 160,000 Tory party members.

In a speech accepting his nomination, Mr Johnson said: “We know the mantra of the campaign that just went by… it is deliver Brexit, unite the country and defeat Jeremy Corbyn. And that what we are going to do.”

“We are going to energise the country, we going to get Brexit done on October 31, we going to take advantage of all the opportunities that it will bring in a new spirit of ‘can do’,” he continued.

“And we are once again going to believe in ourselves and what we can achieve. And like some slumbering giant, we are going to rise and ping off the guy ropes of self-doubt and negativity, with better education, better infrastructure, more police, fantastic full-fibre broadband sprouting in every household.

“We are going to unite this amazing country.”

It was thought that Mr Johnson was the frontrunner throughout the contest, despite no-shows for two of the televised debates.