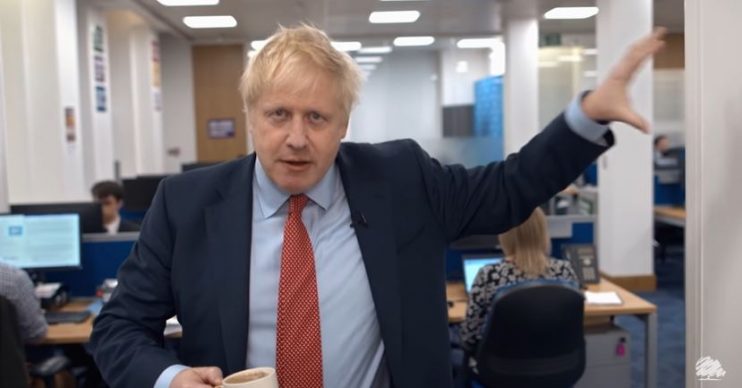 Wait, what about the bag!?

The Conservatives shared a video showing the Prime Minister answering some questions about his day-to-day life and the forthcoming general election – all while taking a quick tea break.

In the video, posted across the party’s social media platforms on Tuesday (12.11.19), Boris is seen walking through his campaign offices while someone behind the camera fires questions at him.

Halfway through, he reaches a small kitchen and fetches a mug before adding a teabag, then boiling water and then a splash of milk.

More controversially, the PM appears to walk away from the kitchen with the teabag still floating in the mug.

On Facebook, many people in the comments struggled to get past the tea issue.

One asked: “Anyone else annoyed by the fact that he put the milk in whilst the tea bag was still in the mug?”

Someone else wrote: “He left the tea bag in and didn’t allow it to brew and was spilling the tea!”

A third said: “Is it wrong that I couldn’t concentrate on the last part because I was so concerned that he hadn’t taken his teabag out, but had put the milk in and was prepared to walk away with the tea… teabag still in it!”

“God… Boris needs a lesson as to how to make a cup of tea!” insisted a fourth.

Another said: “I could never vote for someone who makes a cup of tea and pours the milk in with the bag. Bad form old chap.”

But not everyone was unimpressed, as one Facebook user commented: “How can you wave your cup of tea around like that and not spill it?! Secret skills!”

“Haha legend,” commented another, adding: “This is the Boris I love.”

While he was in the kitchen, Boris was asked what he would you say to someone who’s wondering who to vote for in the election on December 12.

Read more: Royal fans distracted by something in Queen’s photo with Boris Johnson

He told the camera: “I would say it is a very, very simple choice. You can either go with Jeremy Corbyn and the Labour Party and be in no doubt that if you vote for any other of the minor parties, you will end up with a coalition of chaos with Jeremy Corbyn at the lead, at the head.

“And that will not only be an economic catastrophe for this country, it will also be a political disaster because their program, would you believe it, is for another Brexit referendum.”

Elsewhere in the chat, BoJo revealed that he mainly listens to the Rolling Stones nowadays and prefers fish and chips over a roast dinner.

Would you let Boris Johnson make you a brew? Leave us a comment on our Facebook page @EntertainmentDailyFix and let us know what you think.