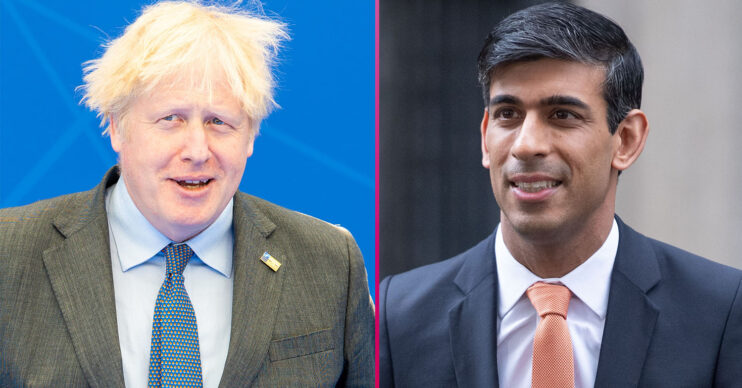 Both were 'pinged' following contact with COVID-hit Sajid Javid

Boris Johnson and Rishi Sunak will now self-isolate after receiving a backlash over their plans to avoid isolation after being ‘pinged’.

The Prime Minister and the Chancellor were both contacted by test and trace following meetings with COVID-hit Sajid Javid.

Despite being ‘pinged’, both MPs were reported to be avoiding isolating themselves due to a little-known ‘pilot scheme’.

However, Mr Johnson and Mr Sunak have now ‘U-turned’ following an angry reaction from Brits and celebrities including Piers Morgan.

What has Piers Morgan said about Boris Johnson and Rishi Sunak on Twitter?

Taking to Twitter, Piers made it clear he was not impressed.

He retweeted a breaking news report, adding his own view on the ‘hypocritical’ development.

Read more: Coronavirus news: Third wave ‘could last all of summer and autumn in the UK’, expert warns

Piers wrote: “WHAT? So once again, one rule for the people setting the rules and another for the rest of us?

“This is a terrible decision.”

“…than Boris Johnson locked away at Chequers, self-isolating from the virus we’re supposed to be free from.”

Why do the Prime Minister and Chancellor need to isolate?

Both Boris Johnson and Rishi Sunak reportedly had face-to-face meetings with the Health Secretary this week.

One rule for the people setting the rules and another for the rest of us?

However, reports had suggested neither the PM nor the Chancellor will abide by the Government’s own measures.

Instead, they would apparently take part in a “daily contact testing pilot”.

A Downing Street spokesman told reporters today: “The Prime Minister and Chancellor have been contacted by NHS Test and Trace…

“…as contacts of someone who has tested positive for COVID.

“They will be participating in the daily contact testing pilot to allow them to continue to work from Downing Street.

“They will be conducting only essential government business during this period.”

However, the announcement provoked a furious backlash on social media.

There were particular concerns that self-isolation could cause havoc in the coming weeks.

Furthermore, Communities Secretary Robert Jenrick said members of the public will still have to self-isolate if pinged.

In fast-moving developments, the PM and the Chancellor apparently changed their plans.

Therefore, the PM will isolate at Chequers.

Rishi Sunak will also “isolate as required” and will not be taking part in the testing pilot.

Before the U-turn, Mr Jenrick said the pilot scheme was being trialled by about twenty public sector organisations.

He added: “It means that the Chancellor and the Prime Minister will be able to conduct the most essential Government meetings.”

He also noted they will not meet with friends or family or socialise.

The MP continued: “So it is relatively restrictive.”