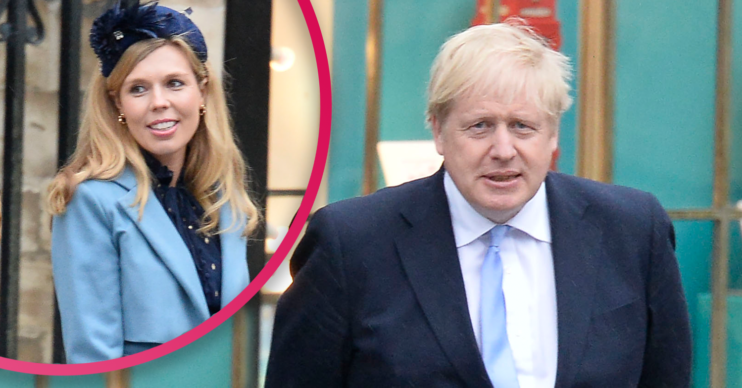 Boris Johnson and Carrie Symonds did get married yesterday (May 29), Number 10 has confirmed.

The Prime Minister became the first leader to marry while in office in 199 years.

And, earlier today (May 30), the happy couple released a picture from their wedding.

Now, as well as that, a second picture has been shared and new details have emerged.

What do we know about wedding of Boris Johnson and Carrie Symonds?

Boris and Carrie said “I do” in a Catholic ceremony at Westminster Cathedral yesterday.

The wedding took place in front of a small group of close family and friends.

According to COVID rules, just 30 people were in attendance.

After the top-secret ceremony, the happy couple posed for pictures in the garden of 10 Downing Street.

The couple’s two-year-old son Wilfred was on hand to witness his parents’ nuptials.

So what did Carrie wear?

Boho in style, she accessorised the look with a flower headband.

It was designed by Costarellos and cost £2,870.

And the picture shows the couple gazing lovingly into each other’s eyes.

What has Number 10 said about the wedding?

Few details have been released about the wedding, but Number 10 did make a statement.

A rep said: “The Prime Minister and Ms Symonds were married yesterday afternoon in a small ceremony at Westminster Cathedral.

“The couple will celebrate their wedding with family and friends next summer.”

However, a source close to the couple – who started dating in 2018 – did reveal more details of the day.

The event was apparently six months in the planning, with the 30 guests invited right at the last minute.

The ceremony was officiated by Father Daniel Humphreys, who baptised Wilfred last year.

An insider also revealed that Boris “couldn’t take his eyes off” Carrie as she walked down the aisle.

“She came down the aisle and he didn’t take his eyes off her. They read their vows then shared a kiss. They looked besotted,” they told The Sun.

A source close to Carrie also revealed: “They are both absolutely thrilled. The whole thing has been conducted amid great secrecy and planned meticulously.

“It was just their secret and that made the day so special.”

Huge congratulations to @carriesymonds and @BorisJohnson on their wedding.

Late this afternoon, new details and a second photo were released.

James Cleverly, who worked with the PM when he was London Mayor, shared a picture of a barefoot Carrie in the garden posing with her new husband.

Boris had taken off his jacket and tie and rolled up his sleeves in the relaxed photo.

The picture also gave away details of the celebration that took place after the wedding.

The wedding had a summer festival theme, with hay bales, bunting and the bride going barefoot.

It was also revealed that Carrie will now be known as Mrs Johnson.

Head to our Facebook page @EntertainmentDailyFix and send your congratulations to the couple.