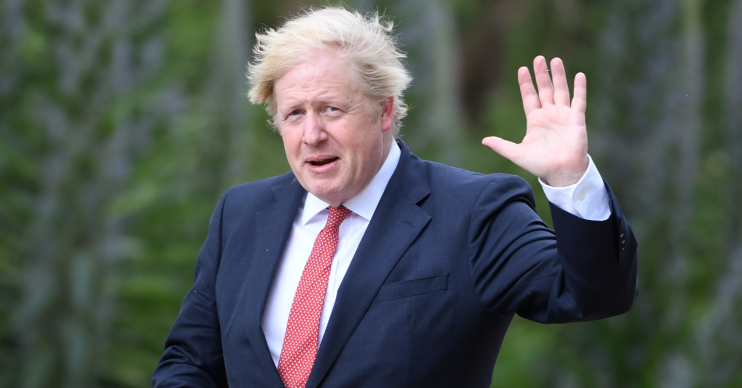 Has he stretched his support bubble?

Prime Minister Boris Johnson has been accused of breaking a key lockdown rule.

The politician became a dad for what’s thought to be the sixth time back in April.

The couple revealed the baby’s middle names – Lawrie Nicholas – are in tribute to their grandfathers.

At the time of Wilfred’s birth, however, Brits were pretty much confined to their homes.

And grandparents across the country suffered as they were told to isolate at home and go without seeing their beloved grandchildren in the flesh.

Read more: Boris Johnson tells parents it is safe for kids to go back to school

That changed earlier this month, however, when those living alone were able to form support bubbles with one other household.

As a result, that finally meant any single grandparents could be reunited with their grandchildren.

But the emphasis is on the word single – and has baby Wilfred met any of his?

Did Boris break the rules?

Well, one Brit seems to think he has and has accused Boris of “breaking the rules”.

As for your other question about Wilfred, well, you know I never normally comment about these sorts of things.

He said: “Can I ask on a personal note, how Wilfred is getting on. Is he keeping you awake at night, has he seen his grandparents yet?”

Boris laughed at the question and first replied to the journalist’s more serious coronavirus question.

He then commented: “As for your other question about Wilfred, well, you know I never normally comment about these sorts of things.”

Boris neither confirmed nor denied that Wilfred had met his grandparents.

Instead, he revealed: “But all fine so far, all doing well.”

Giving Brits the brush off

The brush off led some to comment that the PM had “passed off” the part of the question that asked if the tot had met his grandparents.

One tweeted: “I see Worzel passed off the question has your new arrival met his grandparents?”

He then alleged: “That means yes he has and broke the rules.”

The PM’s father, Stanley, is married, so that counts him out of forming any support bubble with his son.

Boris’s mother, Charlotte, an artist, is thought to be single, although her living arrangements are not known.

Boris treats everything as a joke! Laughing at the coronavirus briefing yesterday and today he had a little chuckle about child poverty. He is a bumbling idiot!

I saw yesterday’s briefing. Stuttering, stammering, hesitation, disjointed, prevarication, obfuscation (poorly executed). @BorisJohnson really is a cringeable shocking embarrassment. No wonder these briefings have such low ratings – hang on, maybe that is the cunning plan?

Carrie’s father, Matthew, is said to be married with three children, but it’s not know if her mother, Josephine, has a partner.

The pair aren’t together and Carrie is reported to be a result of an affair between the two.