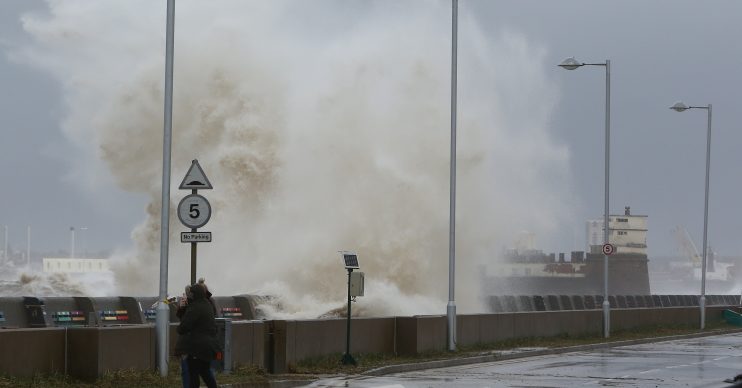 There are 170 flood warnings in place across the UK

First, we had Storm Ciara, and now Storm Dennis is taking its turn to cause havoc up and down the country.

According to experts, Storm Dennis is actually going to get WORSE over the rest of the weekend, as it builds into what’s known as a ‘bomb cyclone’.

The storm has already claimed one life after a teenage boy was killed going into the sea in Kent.

#StormDennis has been rapidly developing overnight and will continue to deepen through today.

The central pressure is forecast to get near to 920 hectopascals (millibars) which is one of the lowest known pressures in the North Atlantic pic.twitter.com/e2nv6vswz6

The Met Office issued a tweet this morning, warning that the latest storm is likely to increase in strength as the weekend goes on.

Alongside an ominous-looking weather video, they wrote: “#StormDennis has been rapidly developing overnight and will continue to deepen through today.

This could be a step up from what we have seen before.

“The central pressure is forecast to get near to 920 hectopascals (millibars), which is one of the lowest-known pressures in the North Atlantic.”

Such a drop in pressure can cause something called a ‘bomb cyclone’, resulting in winds of up to 95mph and other adverse conditions.

The recent storms have already caused a huge amount of damage across the country.

Earlier on Saturday, a teenage boy was killed after he went into the sea in Herne Bay, Kent.

Emergency crews and paramedics battled to save him, but sadly they were unable to.

There are a number of Amber rain warnings in force over the weekend due to #StormDennis.
Here is some advice for preparations you could take.
🌧️🌧️🌧️
Stay #WeatherAware pic.twitter.com/bTKhKngkqY

On the same coastline, a Royal Navy warship was dispatched to search for a man reported missing this afternoon.

Hundreds of flights have been cancelled, and at the time of writing 170 flood warnings were in place in different parts of the UK.

He said: “This could be a step up from what we have seen before.

“We had a big storm last weekend, [and we now have] saturated catchments, snow melt and rainfall, so it is a perfect storm.”

Stay safe out there, everybody!