Piers Morgan told a guest he was being a "sexist pig" on Monday's Good Morning Britain during a heated debate on women being football commentators.

Former Chelsea player turned pundit Jason Cundy was on the ITV show to argue that females should not commentate on football matches because their voices are "too high-pitched". 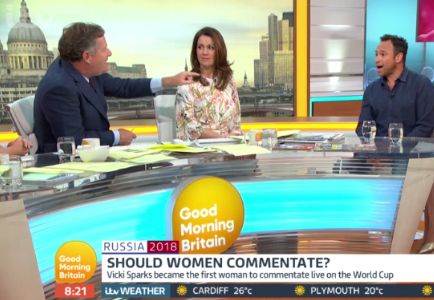 He argued: "I prefer to hear a male voice for 90 minutes. A high-pitched voice isn't what I want to hear. I think if there is a moment of drama, which there often is in football, it needs to be done with a slightly lower voice. It's a personal preference."

Piers, 53, disagreed and told Jason he was being "ridiculous". The programme ran Jason's voice through a pitch monitor along with a woman's and found it was in the same range.

Piers, thank you for calling out Jason Cundy. Such a sexist clown. 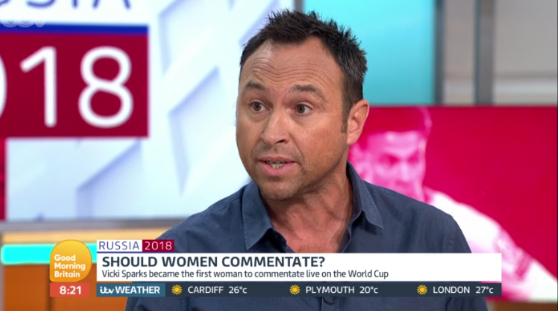 Jason said female voices are too high-pitched to be football commentators (Credit: ITV)

The host said he has enjoyed seeing more women take on roles as commentators and pundits in this summer's World Cup.

"I think some of the women have been better than the men," he said.

He then blasted Jason saying: "My criteria is not are they male or female but do they know what they are talking about? Your annoyance is that they have pitchy voices even though yours is just as pitchy which makes you a sexist pig! How do you plead?"

Jason repeated his argument that it was personal preference, just like someone might prefer to hear Ed Sheeran sing over Celine Dion. 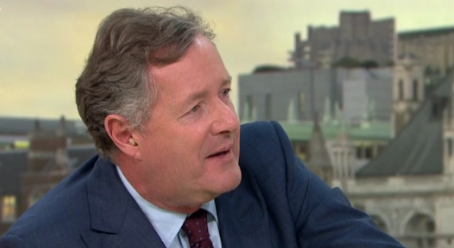 Piers told their guest they were being "ridiculous" (Credit: ITV)

Many viewers agreed with Piers and took to Twitter to thank him for taking Jason to task for his sexism.

"Piers, all I want to say is thank you for calling out Jason Cundy. Such a sexist clown," wrote one.

"Jason Cundy on @GMB what an absolute disgrace," said another, adding: "@piersmorgan @susannareid100 the 50's called and want him back with his sexist views ... don’t like the sound of a woman’s voice !? His mum would be so proud .. #gmb #womencommentatorsrock."

A third said Piers was right, saying they thought Cundy was a "a bigoted sexist idiot." 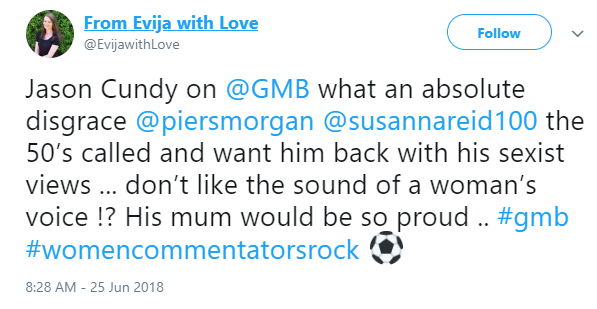 However, other men agreed with the former footballer and said they also preferred to hear male commentators over female ones when watching a match.

"They're missing the point Jason Cundy has said numerous times it's his personal preference and I don't see what's wrong in that," wrote one.

"Totally agree with Jason Cundy. Replace Martin Tyler’s voice with a woman’s when Aguero scored that title winning goal. It would never be the same!" said another.

"Jason Cundy was only stating preference. I agree with him," wrote a third. "This isn't being sexist or saying they don't know their job, just because I've got an opinion!!!"

Meanwhile, newsreader Charlotte Hawkins has revealed she has a great way of dealing with her colleague Piers when he annoys her - which has made him threaten to report her to HR!

Do you agree with Piers that Jason is being a "sexist pig" over his views on female football commentators? Leave us a comment on our Facebook page @EntertainmentDailyFix and let us know what you think!