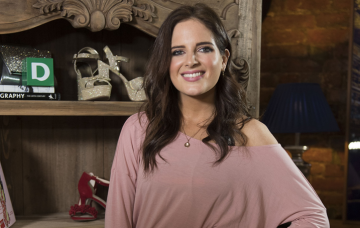 Binky Felstead has been praised by fans for sharing bikini snaps of her two months, and eleven months, after giving birth to her daughter India.

Posting the two candid snaps side by side on Instagram, the former Made in Chelsea star explained to her fans that her exercise routine wasn’t just about looking good , but feeling good on the inside, too.

“Exercise has played a huge part in my post-natal recovery. Not just the physical side, but the mental side, as getting to the gym massively helps me in terms of boosting my energy, managing my anxiety and generally letting off some steam,” she wrote.

Binky, 28, gave birth to India last June, and makes it clear to fans and other mums that her transformation hasn’t happened ‘overnight’.

“The pic on the left is me eight weeks after giving birth, when I first stepped foot back in the gym for some GENTLE exercise. I’m swollen and puffy, but that’s normal guys!” Binky wrote.

She encouraged other mums to start being ‘real and honest’ about what their bodies look like after having a baby.

She added: “And let me just add. I wasn’t in the gym to lose weight. It was ‘me’ time and I was following a post-natal recovery programme. I took it slow and listened to my body.”

Fitness fan Binky is also not afraid to throw out the ‘P’ word dreaded by mums – pelvic floor!

“My workouts were designed to strengthen my pelvic floor and help my core become functional again, and to support my pelvis and knees and other joints that had weakened during pregnancy and labour,” she explained.

Sending out a strong message about positive body image, especially in a world where new mums find themselves surrounded by perfect post-natal bodies, Binky discussed the immense pressure women feel to snap back into shape.

She wrote: “There’s way too much pressure for women to bounce back, look great, and get on with normal life ASAP after having a baby, especially with all of the pictures we see across Instagram and the media – of mums who seem to have done just that.

“But if we just go hell for leather in the gym with workouts that our bodies aren’t ready for, we just end up feeling totally depleted.”

In three hours, the post gained nearly 50,000 likes, with fans praising the ex reality TV star for her advice and ‘sensible approach’.

One fan described Binky as ‘an extremely good role model for young women and your daughter,” while another added: “I hope more celebs like you start to show ‘perfectly imperfect’ bodies.”

Do you think Binky is a great role model to other mums? Leave us a comment on our Facebook page @EntertainmentDailyFix and let us know what you think!