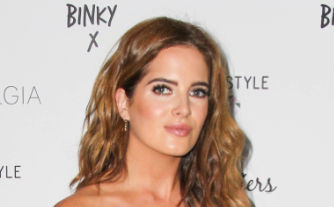 She had to think on her feet

As any parent will tell you, having kids is a joyous experience – but it can have its fair share of low points, too.

And Binky Felstead has revealed how she found herself at the centre of a heartstopping drama recently after locking her baby daughter India inside the house while she was putting the bins out.

The Made In Chelsea star, 27, took to Instagram to recount the story, and explained how she had to run to her mum’s house in her BARE FEET to get a spare key.

Binky lives with India’s father, her Made In Chelsea co-star Josh ‘JP’ Patterson, but she revealed in the clip that he was out when the incident occurred, leaving her alone with the six-month-old.

Wiping her brow, she frowned: “My first mummy meltdown just happened. I was doing the bins – it’s supposed to be Josh’s job but he’s gone to the gym.

“Suddenly, I heard the door slam behind me and I was locked out with no keys, no phone and no shoes.

“India was in here on her own – luckily in her bouncer, so she was quite safe.”

Fortunately, Binky’s mother lives close to the reality stars’ West London pad, so she legged it over there to pick up a spare set of keys – in her bare feet.

“I had to run to my mum’s as fast as I could,” she continued. “Got the keys, ran back. My feet are, like, cut to pieces. Everyone thought I looked like a mad woman.”

Later in the video, she cradled her daughter as a caption flashed up on screen saying: “It’s YOUR JOB @joshuapatterson_jp!!!!!”

She concluded: “So basically, I’m no longer doing the bins ever again at night without anyone in the house. That’s a good lesson learnt.

Binky and Josh have previously come under fire for the way they’ve been bringing up their daughter.

Last summer, some fans reacted angrily after Binky shared a picture of India in the bath, with her ears apparently submerged in bubbles.

Later, the couple posted a snap that showed their – and India’s – feet sticking out from underneath a duvet, leading some people to speculate that their daughter might suffocate.