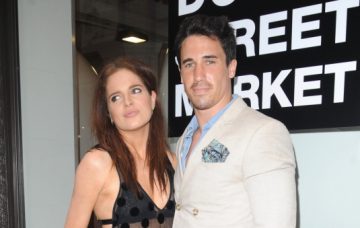 They shared the sad news in a joint statement

Made In Chelsea’s Binky Felstead and Josh ‘JP’ Patterson have split just over a year after welcoming their first child.

They announced their separation in an Instagram post on Monday afternoon, insisting it was a mutual decision and their focus will always be on their daughter India.

In a statement, the reality stars said they were on “very different paths” and had separated quietly away from the glare of the spotlight and are now in a good place going forward.

Their message to fans read: “We have some news to share with you and we wanted you to hear it from us so that things don’t get twisted by hearsay or speculation.

“So with that in mind, it is with a heavy heart that we have to tell you we have decided to separate as a couple.”

The statement continued: “We are still a family and India is, and always will be, the absolute light of our lives, however we have realised we are on very different paths at the moment although we still adore each other, we need to give each other the space to grow.

“There are no secrets and no one has been hurt in any way. We now move forward with love, friendship and a deep respect for one another and the family we are 110% committed to.

“We have been going through this privately for a while and we are now in a good place. We won’t be commenting on this further.”

At the time, they told Hello! Magazine that having India had “cemented” them as a couple, after Binky found out she was expecting while they were broken up.

“It’s worked in the most backwards way possible but it’s worked,” said Binky, while JP said: “We’ve very much not had a conventional relationship but organically we’ve got to a point where I want to be here day and night to be with Binks and India.”

As well as featuring on E4’s Made In Chelsea, the pair also starred in their own spinoff series, Born In Chelsea, focusing on Binky’s pregnancy and the birth of India.

The pair proved their enduring friendship over the weekend when Binky flew to Berlin with India to support JP as he took part in a charity race.

Has this split surprised you? Let us know on our Facebook page @EntertainmentDailyFix.