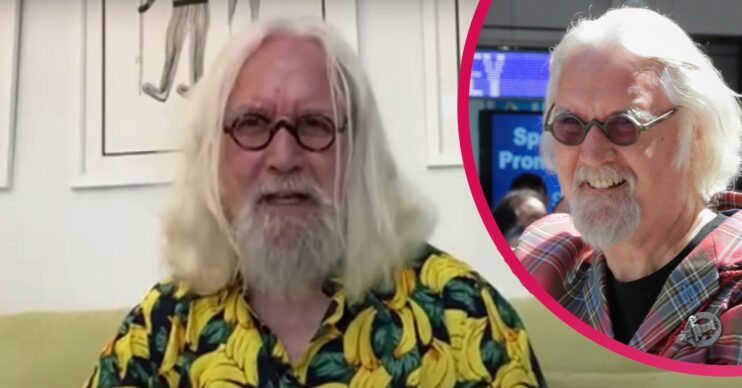 Billy Connolly has proudly revealed that he has learned how to ‘hypnotise’ his hands to stop the shaking caused by Parkinson’s.

The 79-year-old actor and comedian was diagnosed with the disease back in 2013 and decided to retire from comedy in 2018.

What did Billy Connolly say about Parkinson’s?

Sir Billy Connolly revealed in an interview with Radio Times that he has found a way to combat shaking caused by Parkinson’s. The legendary Scottish comedian told the publication that he had learned how to ‘hypnotise’ his hand into stop shaking.

He said: “I’ve learnt how to hypnotise my hand. I glare at it and it kinda quivers. I just stare at it, and eventually, it stops. It’s quite a good trick. We love it.”

Read more: Billy Connolly gives heartbreaking update to fans on his Parkinson’s explaining he can no longer write

The star heartbreakingly also revealed that the disease means he can’t write letters anymore. He told Radio Times that he used to love writing letters, however, his writing is illegible now.

What else did Billy say?

Billy is the proud owner of numerous fountain pens and inks but isn’t able to use them anymore due to his Parkinson’s.

Reflecting, he said: “I’ve never tried to cover up the illness. I’m [bleeped] off with it. It won’t go away. People are kinda chained to it. But I try to be cheery.”

The comedian and musician also said that he doesn’t like Parkinson’s help groups. He said that while people may find help from discussing the disease with others, he can’t imagine anything worse. The Scottish star declared that he didn’t want the disease to be the main subject of his life.

The star also revealed that he has been watching his old stand-up routines. He said that he feels as though he is watching someone else, but is enjoying the experience and the jokes.

What else has Billy Connolly said about Parkinson’s?

In October, during an interview with the Observer, Billy said that Parkinson’s has changed his outlook on death and the afterlife. When asked what he felt about his life potentially being cut short by the illness, he said: “I do feel cheated, in a way?”

However, he revealed that his disease had changed his belief in what comes after death.

Read more: Sir Billy Connolly thinks there might be might be something lovely on the other side of death

“I’m sure there’s something,” he said. “I don’t know, in recent years, I’ve just got a feeling that there is. That we don’t just turn to [bleep].”

Billy Connolly released an autobiography in October this year called ‘Windswept and Interesting’, in which he talks about his life and career.