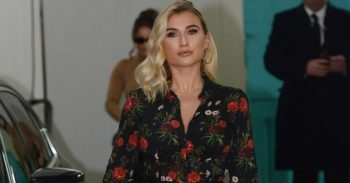 Billie Faiers opens up about losing sleep with wedding stress

Her mum Suzanne wants her to relax

Billie Faiers has revealed how stress has impacted her life in the build-up to her wedding.

The 29-year-old former TOWIE star opened up about losing sleep and suffering from bad skin in a new clip from her ITVBe reality show, The Mummy Diaries.

Billie is due to tie the knot in a fancy wedding in the Maldives with boyfriend Greg Shepherd.

Read more: Billie Faiers joined by sister Sam and Ferne McCann for hen do in Ibiza

In the The Mummy Diaries clip, published by OK! Magazine, the mum-of-two confided in her sister, TOWIE’s Sam Faiers, and mum Suzanne Wells.

Suzanne says of her eldest daughter, “I just want her to try and de-stress a little bit because she’s been under pressure”, adding that, although it’s usual for brides to stress, Billie has been overwhelmed by her “full-on” workload.

Sam agrees and says: “And obviously it is a happy time and we are all really excited about it but also, you are putting so much on yourself.”

Billie goes on to admit that she has been stressed for the last few months in particular.

She explains: “I am struggling sleeping some nights, my skin has been bad. I just want to switch off and relax.”

Speaking further, Billie says she’s eager to get to the point where she can actually enjoy the wedding planning process and leave the stress behind.

Potentially adding to her stress was an incident at the weekend that almost led to the wedding being cancelled.

When she and her family gathered at Gatwick for a flight to the Maldives, her dad was reportedly refused permission to board the plane after drinking too much champagne in the airport lounge.

One angry passenger who claimed to have witnessed the whole debacle told the The Sun: “Billie’s dad has been refused on the flight because he was too drunk and all the flights were delayed because of him.

“He delayed everything after that and other passengers were fuming when they saw what was going on.”

Billie and Greg have two children together – Nelly, four, and Arthur, one.

According to reports, they’re going to have around 95 people at their island paradise wedding.

No one from TOWIE apart from Ferne McCann has been invited, including Billie’s good pal Gemma Collins.

Speaking to The Sun about the decision, she said: “It’s just literally family and best friends, that’s it. Ferne will obviously be there, but no one else from the show.”

Can you relate to the pre-wedding pressure? Leave us a comment on our Facebook page @EntertainmentDailyFix and let us know what you think of this story.