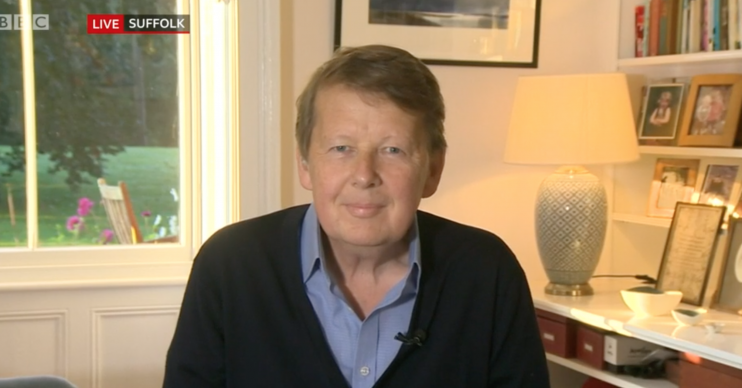 BBC Breakfast star appeared on the show this morning

Former BBC Breakfast presenter Bill Turnbull has opened up about his battle with prostate cancer.

Speaking to hosts Naga Munchetty and Dan Walker, Bill – who is married to wife Sarah and dad to three kids – said the love and support of friends, family and strangers is carrying him through his cancer battle.

He said: “I’m very lucky to have a truly wonderful family, especially a remarkable wife, who’s been an absolute rock.”

Opening up about the outpouring of support, Bill said: “I’ve been really blown away by the amount of support I’ve had, not just from my family, but my friends and people I don’t know wishing me well.”

Speaking from his home in Suffolk, Bill told Naga that he was “feeling really well”.

He said: “I’ve had no aches and pains for a long time and I feel remarkably cheerful and healthy.”

Bill was speaking to promote his upcoming Channel 4 documentary, Bill Turnbull: Staying Alive, which airs on Thursday October 24 at 10pm.

The show’s cameras followed Bill and his family for a year to see how they coped living with cancer.

Read more: James Argent is “banned from EasyJet” after opening door and trying to run onto the Tarmac

In the film, Bill revealed that his youngest son Will “badgered him” to go to the doctor.

“For you guys, it hasn’t been an easy year, has it,” Bill said to his son.

Bill has turned to alternative therapies as well as chemotherapy, and says he’s largely stopped eating meat and drinking alcohol in a bid to help heal himself.

“Only now in the past couple of months I’ve been thinking I can help myself in so many ways, through diet and the way I live and the way I am psychologically, generally in attitude, and all those are little tiles in a mosaic of recovery,” he said.

“If you have love in your life and enough love in your life, that really does carry you through.” ❤️@billtu talking on #BBCBreakfast about his cancer diagnosis and new documentary ⬇️ pic.twitter.com/DnVW5G0htg

Bill revealed: “I used to be very fond of meat and I’ve given it up largely and I’ve given up alcohol which will come as a surprise to you, but I feel much better for it.”

He added: “Attitude is everything. Chemotherapy is pretty tough love but for many people the best thing that we’ve got. But you can help yourself to heal, have a think about why you got ill and then think what can I do to help myself?”