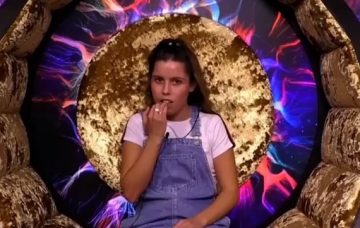 She was removed after old offensive tweets resurfaced

Former Big Brother housemate Ellis Hillon has issued an apology after being removed from the show.

The 20-year-old fast food worker has broken her silence after being booted from the Channel 5 programme shortly after her arrival last week.

It followed an investigation into alleged offensive tweets that involved racist language.

In a statement issued to The Sun, she said: “I want to stress how sorry I am about any offence and upset that was caused due to what I have said on social media.

“I understand that I was totally in the wrong and I should never have said such horrible things. All the comments were from my teenage years and I am deeply ashamed of them.

“I didn’t stop to think how they could be so hurtful at the time.”

Ellis denied being racist and said she hopes people can forgive her.

Big Brother confirmed on September 15 that Ellis had been removed from the Big Brother house after an investigation into “offensive and unacceptable posts on social media.”

McDonald’s worker Ellis, from Glasgow, entered the house to cheers from the crowd during the opening show but, just hours later, The Mirror uncovered tweets apparently sent by her dating back to September 2014.

One alleged tweet read: “Oh bleep, aye it’s 9/11! RIP to everyone who died and [bleep] they smelly [bleep] terrorist [bleep]!”

Another post, written in January 2015, four months after her 9/11 slur, reportedly used the N-word, although it isn’t clear what this is referring to. 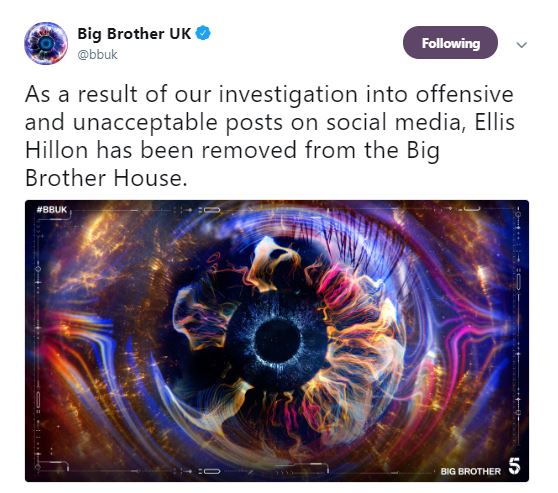 Viewers saw Ellis being removed from the house in scenes aired on Big Brother.

She was called to the diary room and confronted about the tweets, which had been printed out on a piece of paper for her to read.

Ellis was told: “Big Brother needs to speak to you about something that has come to light since you’ve been in the house. Big Brother has been made aware of posts that have come from your social media accounts that contain offensive language. Ellis, can you tell Big Brother if you wrote these and posted them on social media?”

After looking at the tweets, Ellis said: “Yeah but yeah… years ago, but yeah.”

Big Brother told her: “Ellis, Big Brother does not tolerate offensive language and as a result we’ll be removing you from the house immediately. Is there anything you’d like to say?”

Ellis replied: “No, apart from I’m sorry. I don’t want to see anyone, I just want to go home.”

Have you been watching this series of Big Brother? Leave us a comment on our Facebook page @EntertainmentDailyFix and let us know what you think!