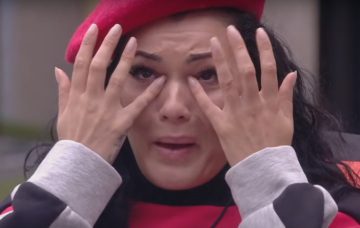 Housemates are turning against each other - but is it 'bullying'?

Big Brother housemates have been branded ‘mean girls’ and ‘bullies’ after a fiery showdown between Anamelia Silva and Kenaley Amos-Sissons.

Spiritualist Anamelia looked to have been forming bonds with her fellow contestants after emotionally recalling her difficult childhood, telling housemates she was homeless as a three-year-old.

But several of those she opened up to later turned on the Brazilian, accusing her of monopolising conversation in the house and being self-obsessed.

Call centre worker Kenaley – who had earlier comforted Anamelia as she sobbed – also suggested the 31-year-old who arrived in the UK with only £30 to her name had cried in front of the cameras because she is an attention seeker.

“My mom, she’s my mom but there was never hugs,” an emotional Anamelia explained as several housemates sat together in the garden.

“She only shouted at me, that’s all.”

Through tears, Anamelia continued with tales of her traumatic younger years, admitting she felt unwanted by her mother.

She revealed: “When I was 12, my mom started giving me my allowance and she said basically, from here on out, this is the money you use to buy what you need… Sometimes I just want my mom because I don’t have the dad.

“I had to raise myself in a way, you know? I just don’t think that I was wanted.”

Although sympathetic at the time and offering reassurances about Anamelia’s experiences being a vital part of who she has become as a person, Kenaley’s patience soon wore thin.

Just a few hours later, the pair clashed in the bathroom with Kenaley blasting Anamelia for sounding condescending.

“A majority of people feel as though it’s about you,” Kenaley said bluntly.

She continued: “It’s always about you… We all listen to your story, and you don’t do the same.”

But as Anamelia protested and insisted issues should be raised at the time, Kenaley suggested Anamelia was playing up her past to ensure people felt sorry for her.

“Once we heard about your childhood I thought I understood you better,” added Kenaley.

“But it just seems like sometimes you’re trying to be nice but… it’s like… are you really?”

She concluded: “It’s a bit sarcastic. It’s a bit patronising.”

Viewers were split on who was to blame for the heated row, with many fans deciding both Anamelia and Kenaley were right – and both were at fault.

@Feisty_Female tweeted about Anamelia: “She isn’t being bullied, they have just had enough of her as have the viewing public, the girl is a moron and only cares about herself, shes a complete fake.”

But not everyone agreed.

Kenaley, Brooke and Sian quickly becoming the mean girls group imo, Anamélia is definitely over confident but their body language (eg walking out of the room one after another) and attitudes towards her is pack mentality if you ask me, including Lewis G and Isaac too. #BBUK

Odd how Kenaley went from being comforted by Anamelia to confronting her in the same evening. Brooke stirred the pot but “didn’t feel like an arguement” sitting in garden. #BBUK

I know Anamelia isn’t very well liked but I do feel sorry for her. I feel like she’s being purposely targeted and it’s actually bullying. Imagine how you would feel if that were you… 🤷🏻‍♀️@bbuk #Anamelia

So is it bullying behaviour?

What do you reckon to this ‘bullying’ row? Leave us a comment on our Facebook page @EntertainmentDailyFix and let us know what you think of this story.