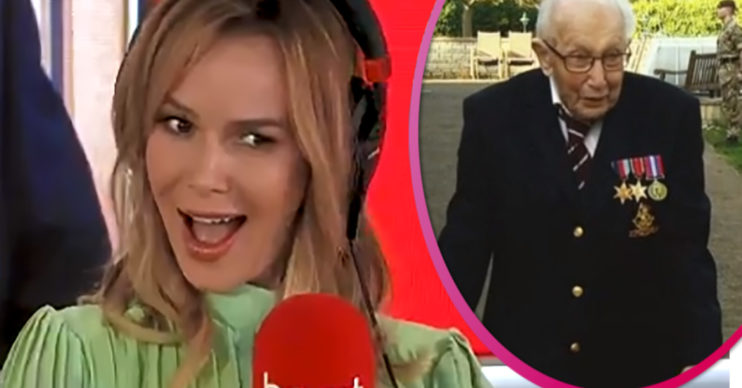 Amanda Holden, a judge on Britain’s Got Talent, was left blushing when Captain Tom Moore flirted with her on her radio show.

The star spoke to Captain Moore on Heart Breakfast Radio today (April 17) about his incredible fundraiser for the NHS.

The 99-year-old war veteran has raised £19 million for the NHS by doing laps of his garden during the coronavirus pandemic.

Amanda told him: “So I know you have been inundated with interviews.

“Do you know how many countries have been asking to talk to you?”

Captain Tom gets his flirt on

He replied: “No Amanda I don’t but I’m enjoying looking at you because you’re such a charming creature.”

.@captaintommoore has a cheeky flirt with @AmandaHolden whilst talking to us about the overwhelming reaction to his walk which has raised over £18,000,000 for the @NHS 👏https://t.co/rvjFrccfvd pic.twitter.com/3retEyd9Nd

Captain Tom added: “I’m enjoying speaking to you all. You’re all such smiling people this morning.

Amanda told him: “Well it’s our great privilege to be talking to you.”

Speaking about the millions he’s raised, Captain Tom said: “The last time I heard, it was 17-and-a-half million rising.

When asked what his late wife would have thought about it all, Captain Tom said: “She would have been absolutely taken aback.

“She would have been sitting there thinking what she could do with all that money.”

Host Jamie Theakston asked Captain Tom how he’s feeling about being a hit with all the ladies on social media.

He replied: “All those ladies, thank you very much. If you’re all looking like Amanda, wow.”

Amanda told him: “Tom you’re an absolute inspiration to us all, thank you so much.

“When it’s all over, I’ll come and put the kettle on Tom, how about that?” as she winked.

Amanda said: “I love you for this.”

He completed the last of the 25-metre laps on Thursday (April 16) but has vowed to continue raising money as long as people keep donating.