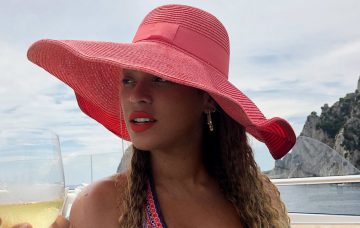 What a sweet family shot!

Beyoncé and Jay-Z have kept their twins mostly out of the public eye since their birth – with the exception of the dramatic Instagram shot celebrating their one month birthday.

Read more: Nadine Coyle opens up on Girls Aloud feud: “They didn’t like me”

But every so often they share a small glimpse of the adorable kids, Rumi and Sir.

The singer shared a selection of photos from the European leg of the On The run II tour – including a gorgeous shot of the mum with her two youngest children.

The album was captioned with a sweet expression of gratitude after family’s trip around Europe.

“Thank you to Europe for the beautiful memories,” the caption read.

“It’s been pleasure being on the run with our family, visiting so many incredible places, doing what we love with who we love. We can’t wait to come back. ”

It was signed simply, “Love, The Carters.”

The gallery features a wide collection of shots – from museum visits, to  shopping, to taking in the scenery.

And snuck into the collection was a sweet shot of Rumi and Sir sitting on their mother’s knee.

And added to that, was a sweet shot of Rumi with Jay-Z, looking out over the water from the deck of a boat.

The musical couple have used their European trip to unleash a bit of drama on the world.

The pair unexpectedly released a joint album entitled Everything Is Love while on tour.

The album led with the single Apesh*t, which included a music video shot in the Louvre, in Paris.

Beyoncé and Jay-Z welcomed their twins in June last year, after Beyoncé had given brith to their daughter, Blue Ivy, in 2012.

Did you catch the Carters while they were on tour? Leave us a comment on our Facebook page @EntertainmentDailyFix and let us know what you think.