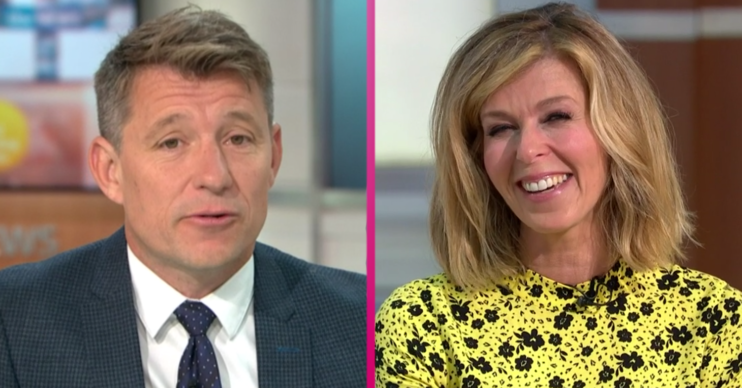 The pair will host Good Morning Britain together next week

Ben Shephard has praised Kate Garraway for coming back to Good Morning Britain.

Speaking on the show today (July 9), he described the move an an important step that would good for her mental health.

“For her own mental health, she needs to come back and get on with life

“To get her here back in the studio, back where she belongs with us to do this programme, I think it’s a huge and an important moment.”

Ben went on to reveal that he has been able to see Kate during lockdown.

After restrictions were lifted, they organised a day out for both of their families outdoors.

Ben gushed that they had the “most fantastic time”.

However, seeing what his friend and her two children Billy and Darcey have been going through was tough.

The GMB star commented:  “It was really great to see Kate smiling, talking very honestly and openly as she has done about the condition that Derek is in –  which continues to be critical.

“Even though he is out of the coma and they can FaceTime him, it’s not simple.”

Kate confirmed on GMB yesterday that she will be hosting the show on Monday (July 13) and Tuesday (July 14) with Ben.

After making the announcement, she playfully told him that she wants to be picked on her.

He joked: “She did say brilliantly that she just wants me to be rude to her – I’m warming up!”

Opening up about her return to the show, Ben added: “Kate coming back into the studio is a very big step and very important step.

“And it’s also a big step for Darcey and Billy what with Derek’s ongoing condition.

“The other thing that was key from Kate’s perspective yesterday is that she pointed out that there are families going through similar things up and down the country.

“Her thoughts and concerns are with them and understanding how they’r getting on with their lives.”

Ranvir Singh was also full of praise for Kate.

The GMB presenter added: “I don’t know she does it.

“Kate is so grateful to have a job to come back to because there are lot of people who have lost loved one and at the same time are suffering financially.

“She love her job, she loves doing this and I think she needs to come back for her own peace of mind and to have a bit of focus in her day.

“It gives you a sense of self because its’ so hard being trapped in that world for so long and it doesn’t stop because Derek is still so ill.”