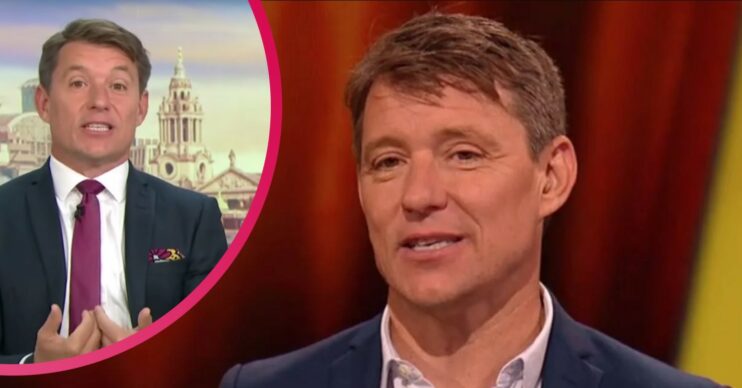 Admits he's been in "agony" during recovery for leg injury

GMB star Ben Shephard has given fans an injury update, revealing when he hopes to be back on ITV.

He was forced to undergo surgery earlier this month after rupturing his ACL in his right leg.

Ben also suffered a tear to his meniscus, the cartilage that helps cushion between the thighbone and shinbone.

What did Ben Shephard say in his injury update?

He thanked fans for their well wishes and support, explaining the different forms of therapy he is making use of.

These include his Physiolab kit which helps ease his pain by circulating ice-cold water over his leg.

It also performs as a compressor to help reduce the swelling in his knee joint.

The telly fave also admitted his physiotherapy sessions have left him feeling sore.

However, he believes he is seeing improvements in building back to being able to extend and flex his leg.

We’re getting there, I think.

Ben said: “It’s agony at times, as anyone who’s been through this will know.

“But a necessary evil. We’re taking it slowly. But we’re getting there, I think.”

When will Ben Shephard be back on GMB?

Ben has been unable to make it into the Good Morning Britain studio as he recovers from his horrific accident.

But he also had positive news for fans who have missed seeing him on the box.

He revealed: “I’m back at work on Monday, so I’ll be joining Susanna behind the desk and as long as I’ve got my leg up… I should be ok.

“Hopefully you’ll join us. But really, thank you for all of those amazing messages.”

He added in the post’s caption: “I just need to remember to set my alarm clock.”

Andi Peters wrote: “You’re like a recovering international athlete! Shall I pop round with ice cream?”

Gaby Roslin added: “Sending you so much love my darling.”

And Rav Wilding remarked: “Rest up, but not too much! Physio is the key with ACL. Fix up soon!”